Did anyone else have another crazy busy weekend?

It sure was a busy one over here.  Totally grateful, not complaining.  ;)

Jon's office party was on Thursday which meant that our weekend began a little earlier than usual.  Elmer helped kicked the long weekend into gear by providing the kids with Trix cereal.  Jon and I refer to this type of cereal as "sugar cereal" and usually the only time the kids have it is if we go to visit my parents.  They were ALL about the "fruity shapes" and I'm not going to lie, so was I.  I've since had two bowls myself...both times after the kids have hit they hay.  ;) 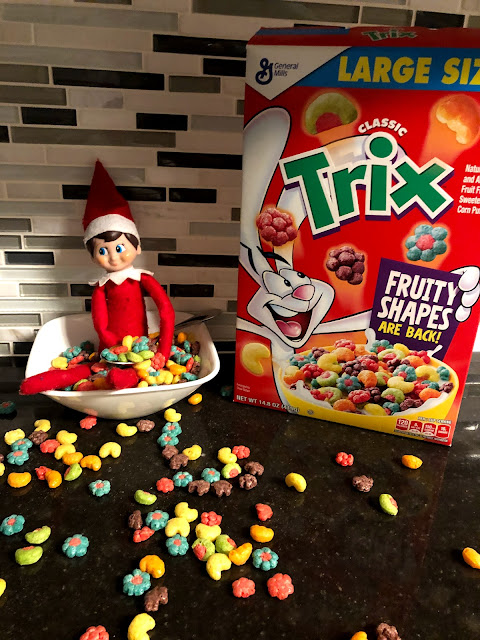 After Jon's office party we walked around for a bit and took in the sights and sounds of the sweet little town we were visiting for the party.  We also stopped by a brewery.  I told Jon to take advantage of his built-in DD for the evening and help himself to a beer.  Not going to lie, just like the cereal, the beer looked soooo good.  Alas, none for me, I did however eat a scrumptious soft pretzel with cheese!

While out and about Jon picked out a unicorn keychain for Eliza with...ahem...sparkle poo... and a rock/diamond set for Henry.  The kids were excited when we arrived home with little toys.  Henry and Eliza threw on their winter coats, headed out to the garage and hammered away to see if they had a diamond in the kit... 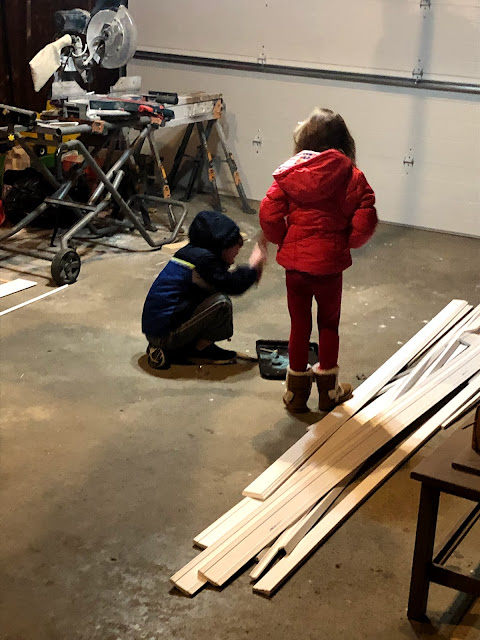 Friday consisted of school for the kids and mine and Jon's Friday breakfast date.

After school pick up, we relaxed for a bit, made dinner and then got ready to meet up with my friend Liz and her little girls to watch Charlie Brown at our local theater. 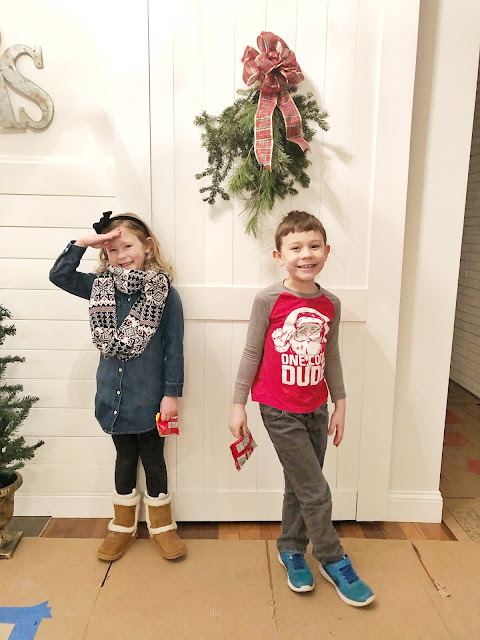 The show was really cute AND to my amazement...and excitement...it was only about 35 minutes long! 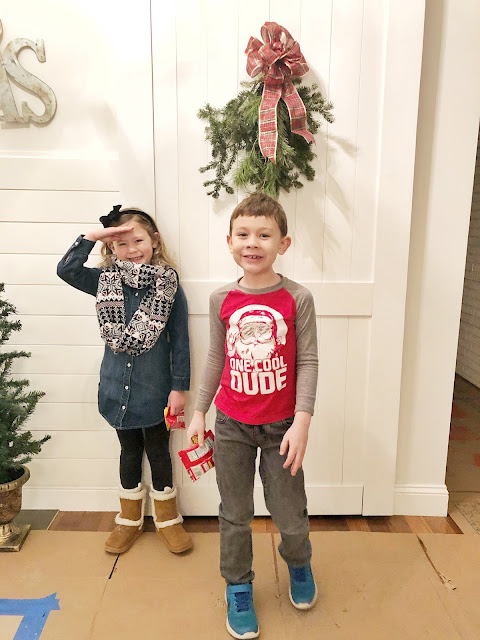 While on our way home from the theater we decided to drive around for a bit to look at some Christmas lights.  The kids helped themselves to some snacks and then out of silence we heard Eliza nonchalantly and calmly say, "My tooth fell out."

She's had some extremely wiggly bottom teeth the last two weeks.  She put her itty, bitty, tiny tooth in my hand while in the car and I held onto it for dear life!  My-oh-my was it tiny!

This girl was beyond thrilled! 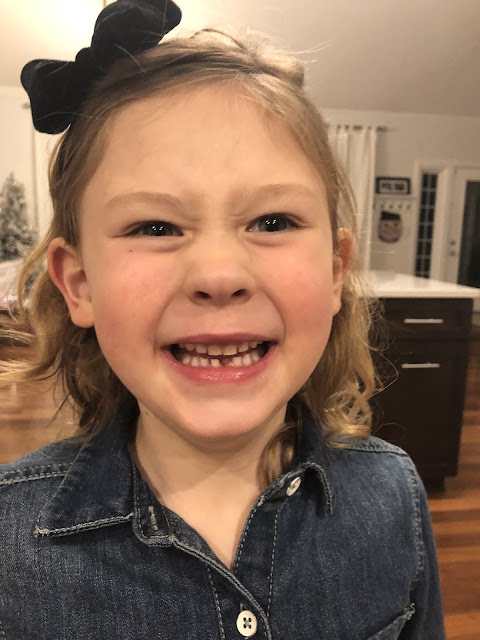 Henry helped write a letter to the tooth fairy and Eliza feel asleep a bigger girl! 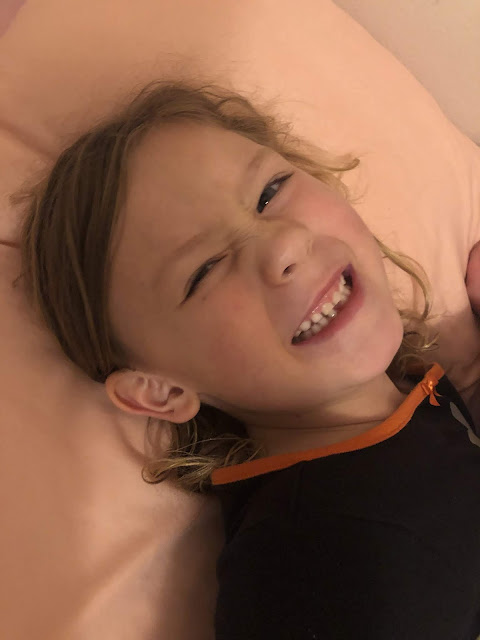 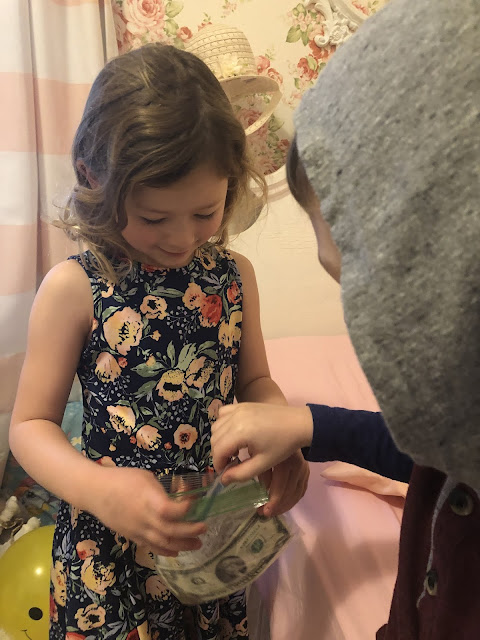 The kids played with the neighbor boys for hours on Saturday.  Jon and I had a few errands to run in the early afternoon and after that we were off to Super Hero Training Camp!

Batman had arrived in his Batmobile! 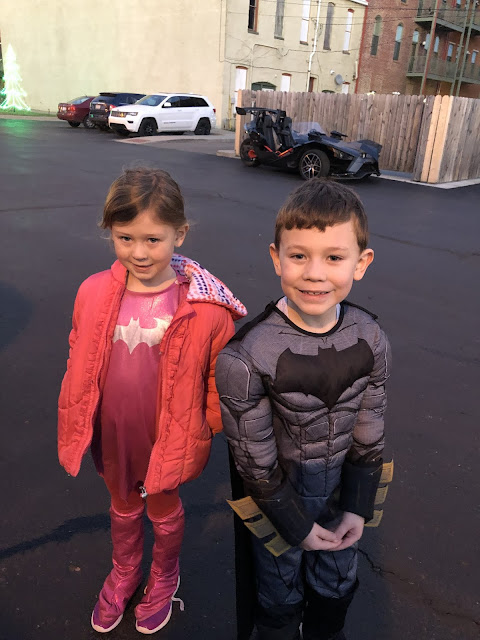 It was getting serious! 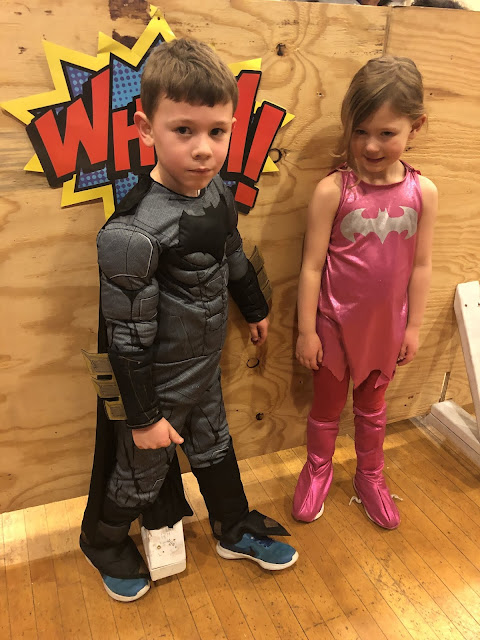 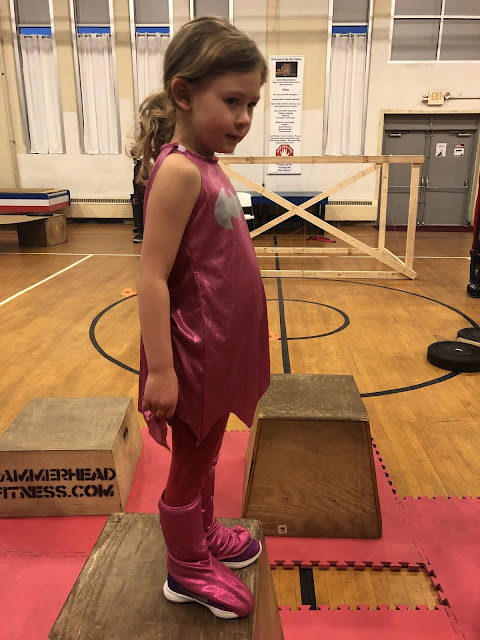 The superheroes helped all the kids safely trek through the obstacle course... 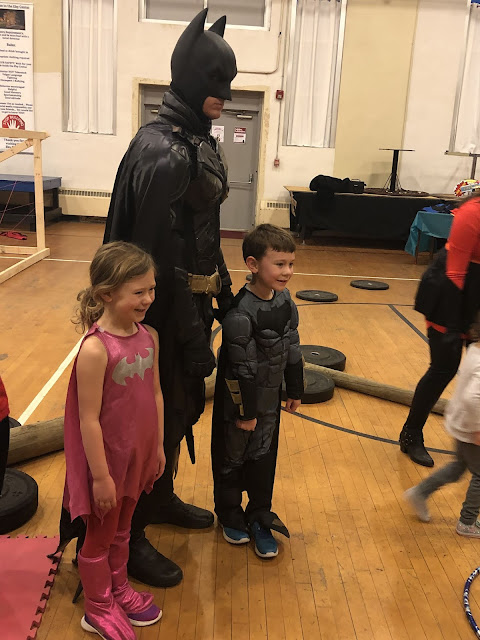 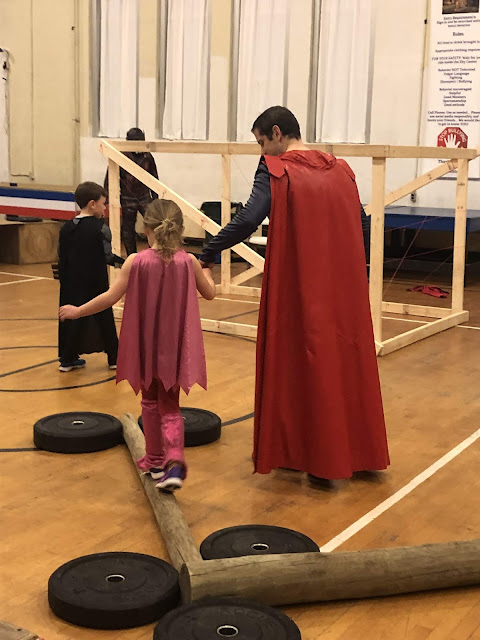 Henry was trying to make it look like the words were coming out of his mouth.  At first I had no idea what he was doing...  Haha 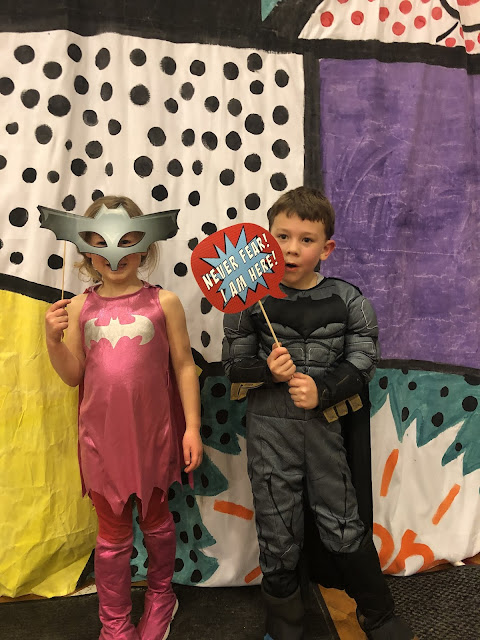 Aaaaaand Eliza can't read the sign she had picked out, so we just rolled with it, even though everyone in the following pictures did indeed have their capes.  Haha! 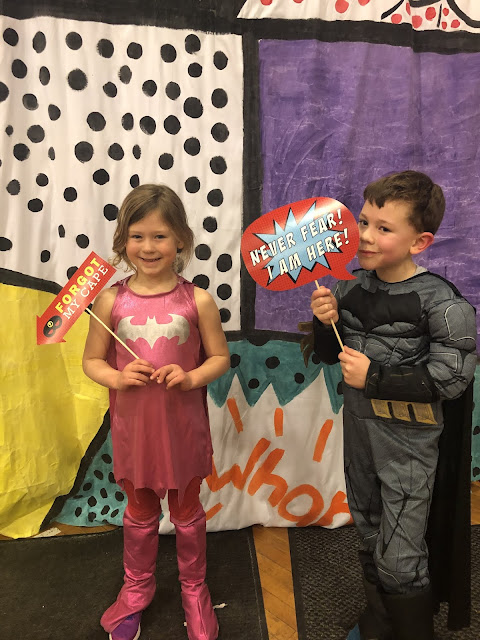 The kids went over and asked Batman for a picture!

He was giving Henry instructions on how to hold one of his "bat weapons."  He had also mentioned to Henry that Henry had forgotten his mask. 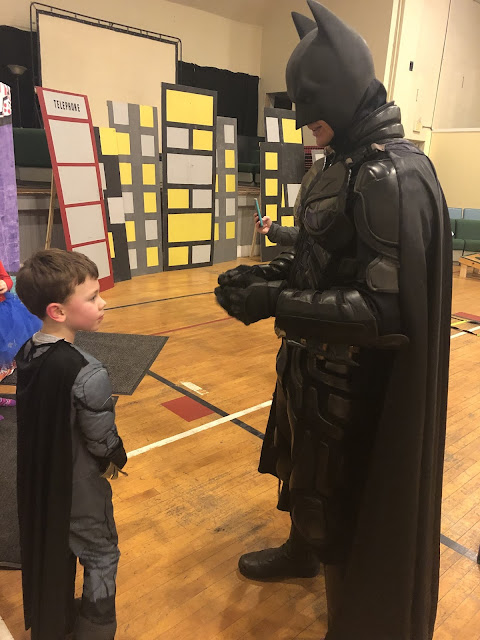 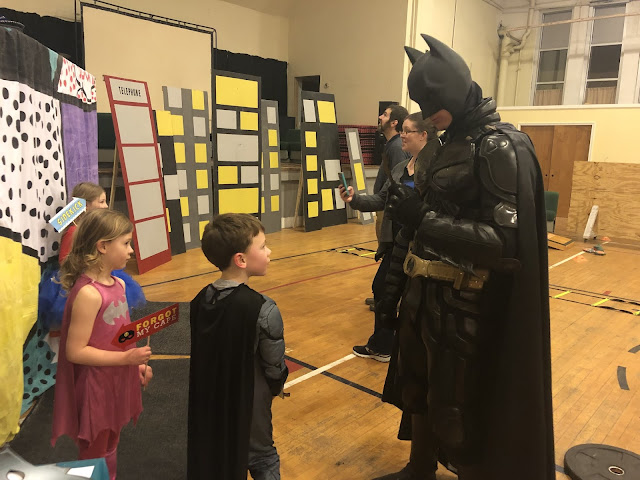 Such a great pic! 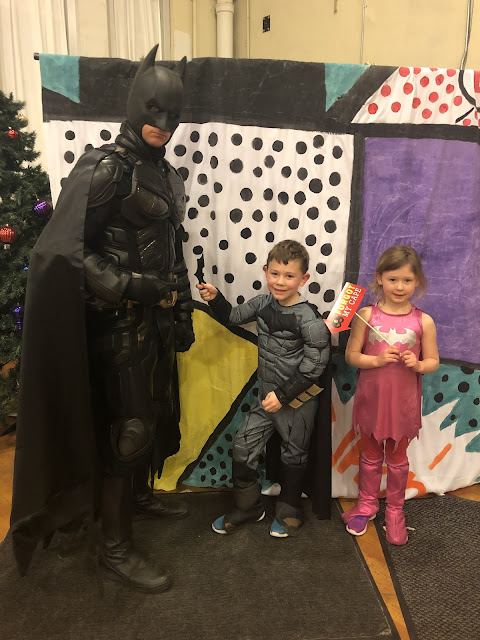 It was time to go, but I told the kids they could go through the obstacle course one last time! 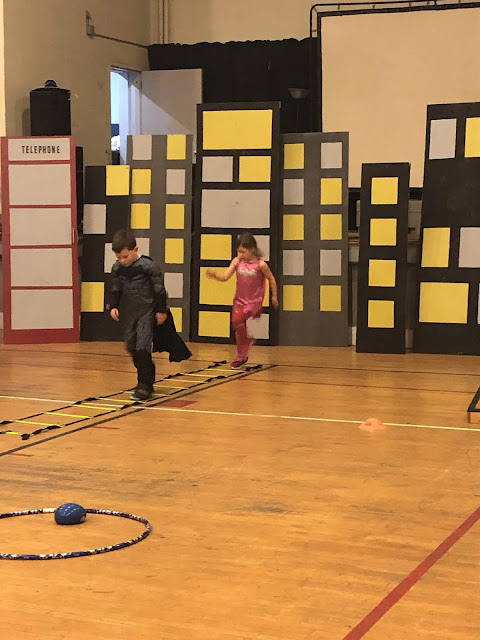 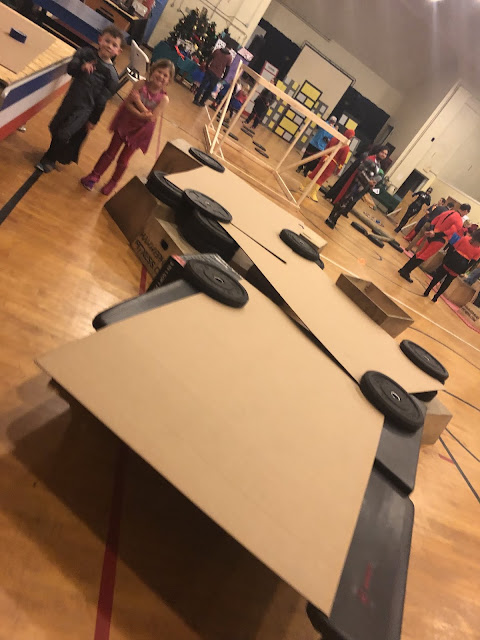 Wonder Woman took a picture of us! 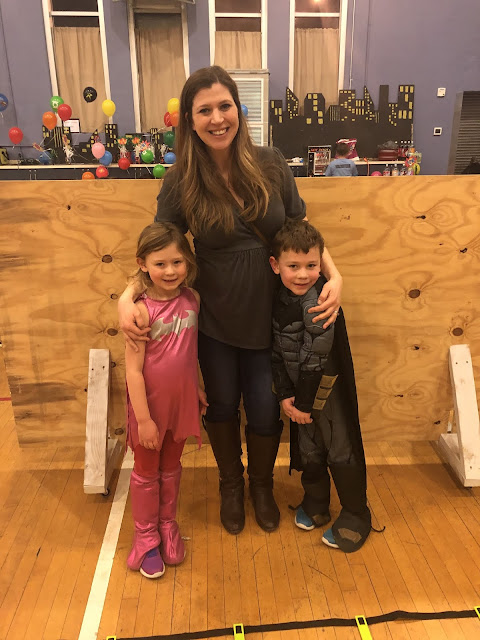 We gathered our things and snapped one last picture in front of the Batmobile! 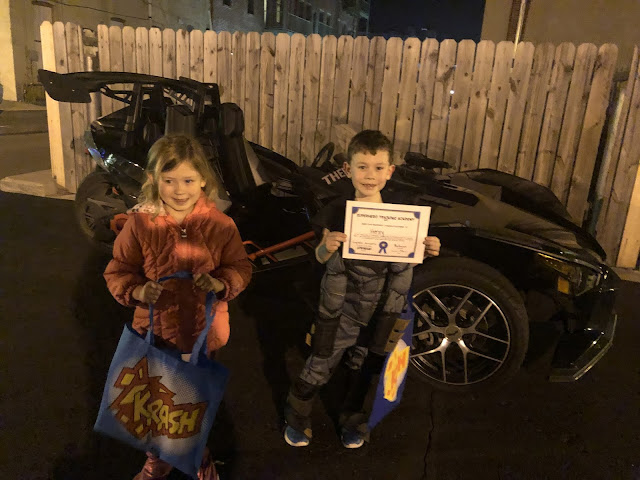 The next morning Elmer had "decorated" our house. 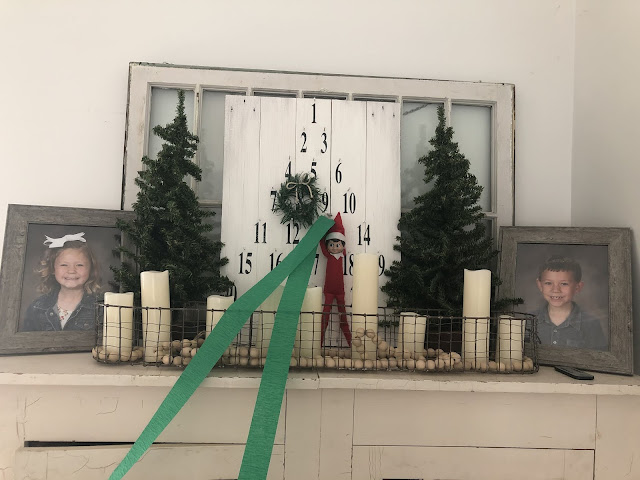 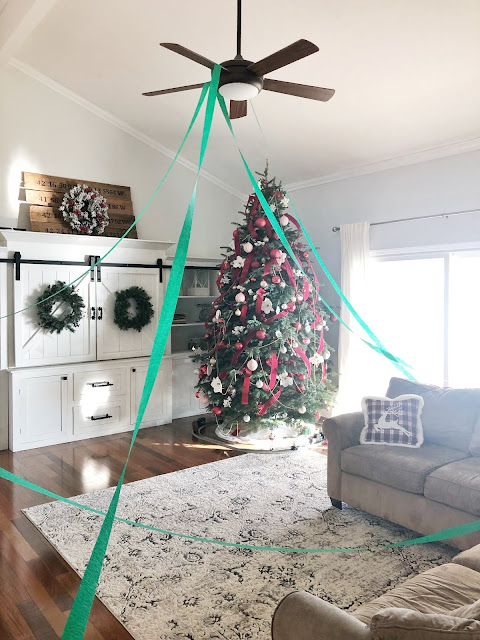 Jon and I had to make some decisions on placement of hooks, the mirror and towel bars in our newly renovated master bathroom.  My friends Katy and Ashley were very helpful in helping me decide where all of those things should be placed. 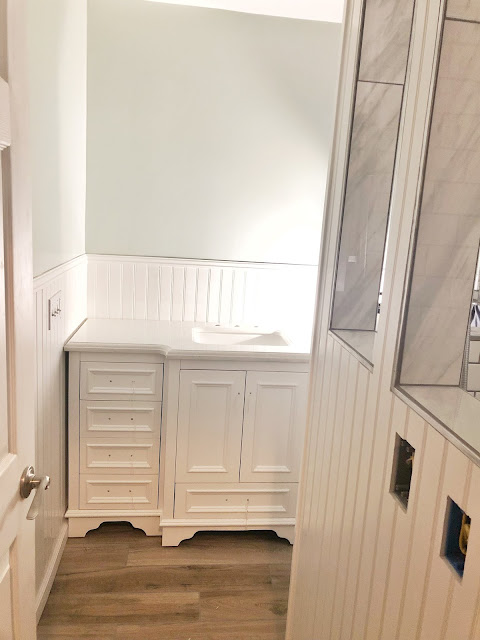 I'm loving everything about this space.  EVERYTHING!!!  As a matter of fact, I had a slight meltdown over something major in this bathroom and my girlfriends helped put my mind at ease.  First world problems, I know, but Jon and I have waited since we purchased this home to reno this space.  I was definitely in freak-out mode, that's for sure, but my girlfriends gave me the advice to stop going in the space until it was further along. 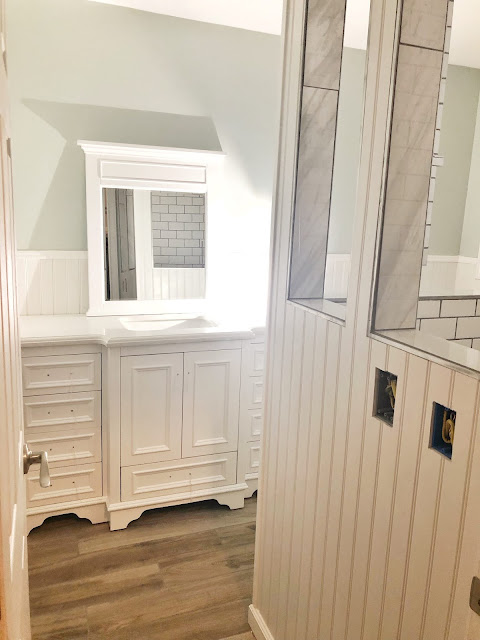 Oh and one last thing - Jon snapped this picture of my 26 week belly...cardboard floors and all!

Between a bathroom renovation and Christmas I'll suddenly remember that I'm pregnant.  Life is all sorts of busy right now.  I'll happily take it.  :) 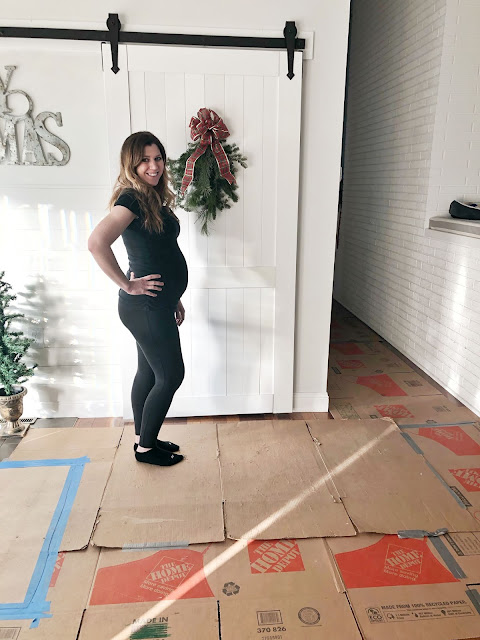 Aaaaaand it's Monday!  I hope everyone has a fantastic and productive start to the week!

Thanks, as always, for stopping by! 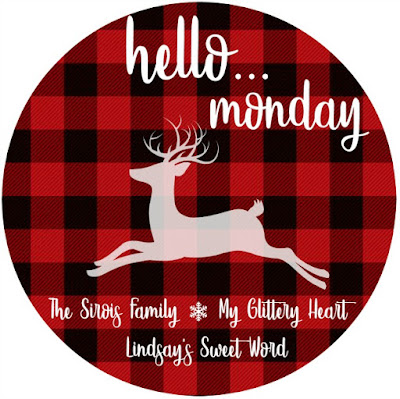 I'm linking up with Lindsay for Hello Monday! 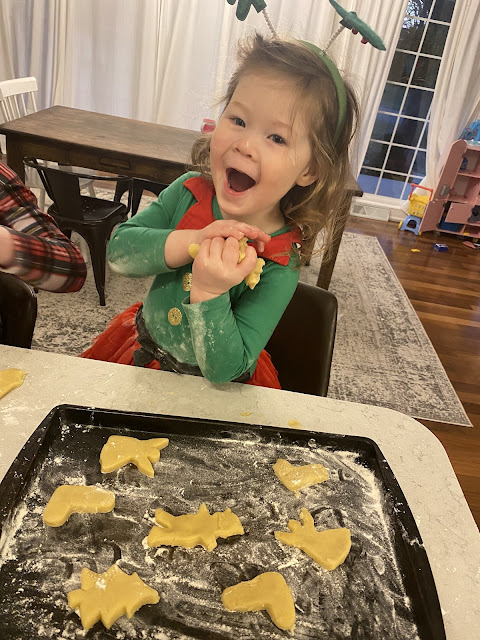