I'm sure by the end of the week I'll need a large glass of vino.  But hey, at least it'll be well-deserved, right?!

Speaking of my silly and sweet kiddos - first thing Saturday morning they remembered it was my birthday and brought me this "birthday cookie" at 7:30 a.m.  Jon and I heard Eliza go into Henry's bedroom and wake him up.  With each other's help (and the help of a kitchen stool), they managed to grab a cookie from high atop the countertop.

The two then quietly walked into our bedroom and screamed, "Happy Birthday, Mama!"  Oh man, kids are the best.  So caring.  So innocent.  So full of love.  It was just a cookie, but they somehow made this little cookie the most special chocolate chip cookie ever! 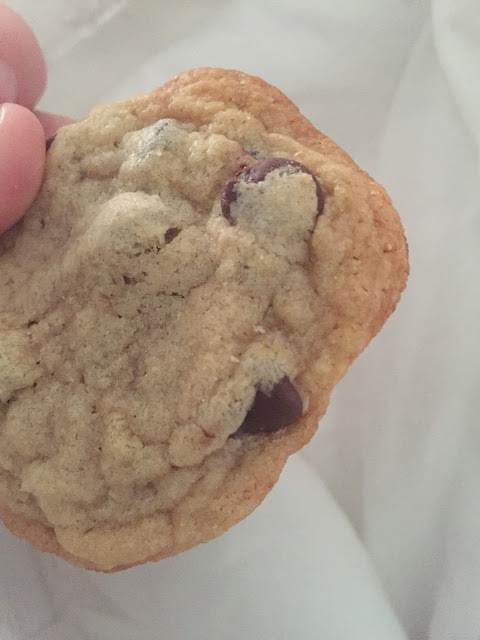 Little does she know that she and Henry are party enough for me these days and that cookie they brought to me in bed was better than any party I could have ever had anyway! 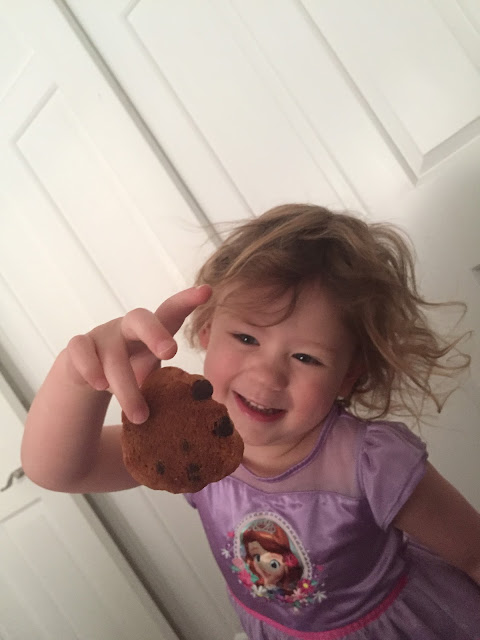 I've been talking about wanting a laptop for quite some time now.  We used to have a laptop, a few actually, but one died and two have weird mechanical issues.

Also, we do, in fact, have a desktop for all my computer/blogging needs, but at the end of the day the last thing I want to do is sit out in the other room, alone and in an uncomfortable chair.  Hence my lack of blogging these days.

But it was a dream of mine to, once again, be lazy in the evenings and sit on the couch with my very own laptop.

When discussing potential laptop options all I wanted/needed was the cheapest/most affordable laptop option, but I still wasn't even sure I'd get one.  So, you can imagine my excitement when Henry accidentally spilled the beans the night before my birthday and told me they got me a computer!

The morning of my birthday, Jon handed over an unwrapped and already opened Amazon box (as to be expected).  I opened the package and ERMAHGERD!  Jon had bought me a MacBook Air!!!!

You guys.  YOU GUYS!!!  I was immediately transformed into Kristen Wiig as the the ecstatic and eccentric Target lady from SNL and her other character who can't contain her excitement!

Now, let me tell you, I don't take things for granted and all gifts are toooootally special.  They're are just material things anyway, right?!  But I must admit, this sure did beat those roller blades Jon bought for me way back in the early 2000's.  LOL! 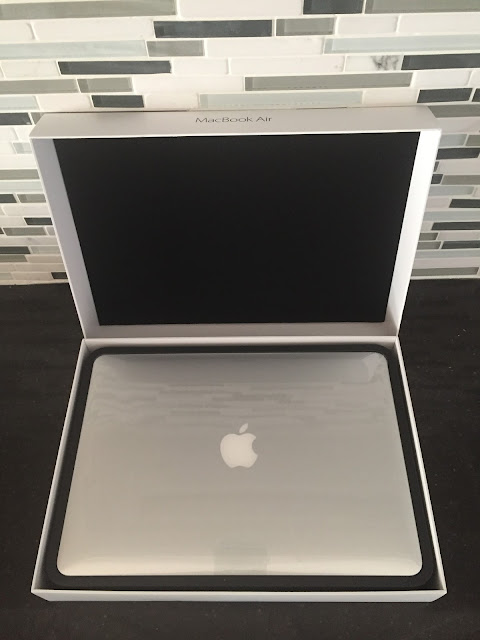 Later in the morning my very sweet and amazing neighbor Amy and I headed out to a memorial service for a neighbor of ours.  It was very sad, but in a weird way it kind of set the tone for the rest of my day...in a good way...in a positive way.

After the service I came home and hugged my family so hard and then I happily got back to "mommy-ing."  Here I am cheerfully eating the kids' leftover lunch, sweeping the floors and about to load more dishes into the dishwasher. 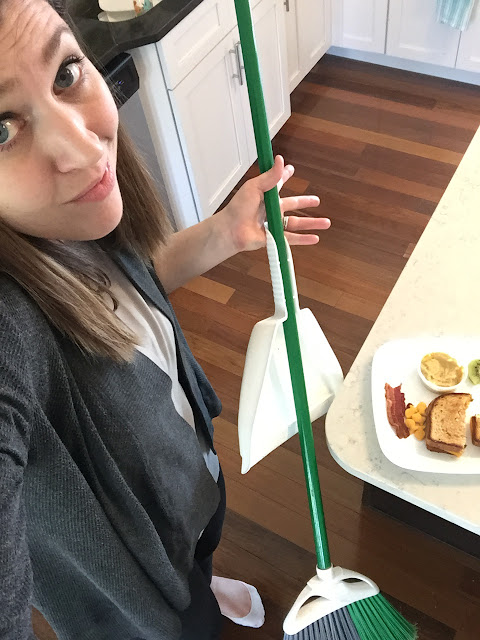 After cleaning up the house and going for a drive with the family (I love going for drives), we headed over to an antique mall and perused the aisles.  I wasn't looking for anything in particular, but it was still fun to see what was out there.

This dollhouse was so stinkin' cute!  We have a much smaller one that we use for Shopkins and we love it!

(P.S. Don't mind the kids' hair and wrinkled outfits.  Since it was my birthday I wasn't about to put up a fight!  Haha!) 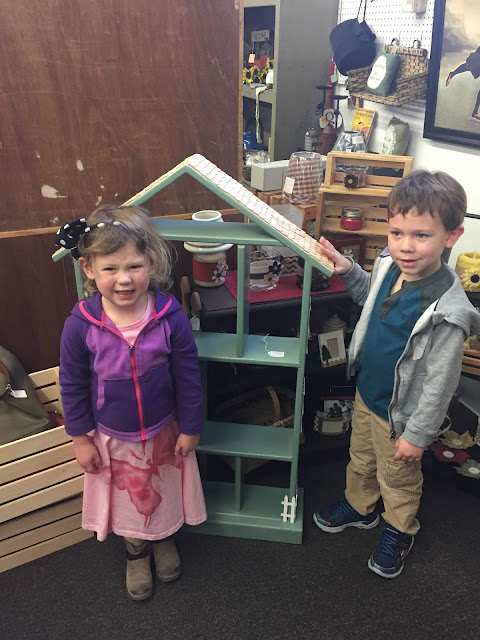 Oh and this table! 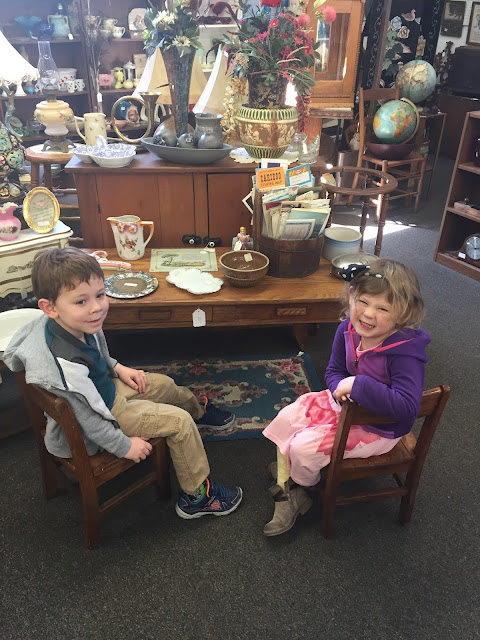 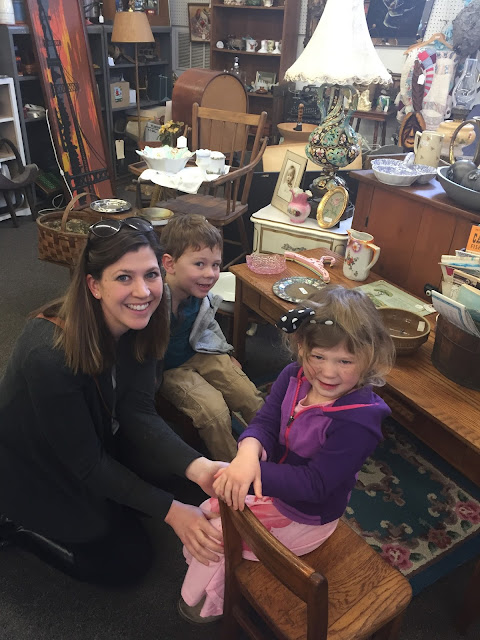 Oh my gosh and this store counter!

Wouldn't this look awesome in a kitchen as an island?! 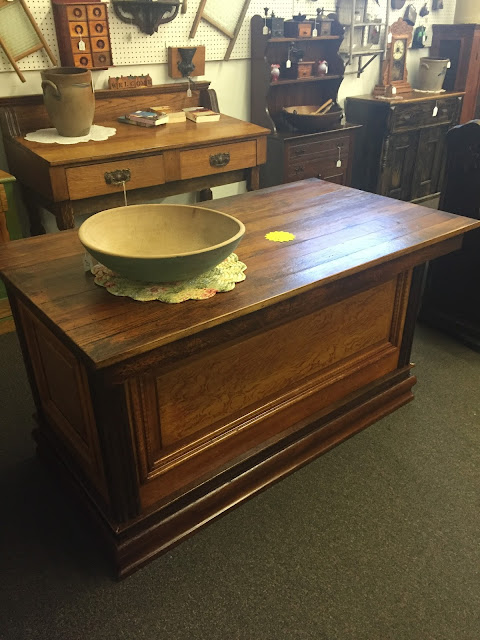 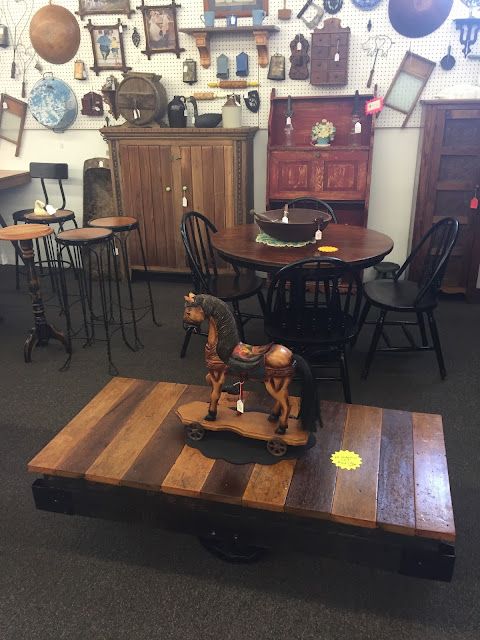 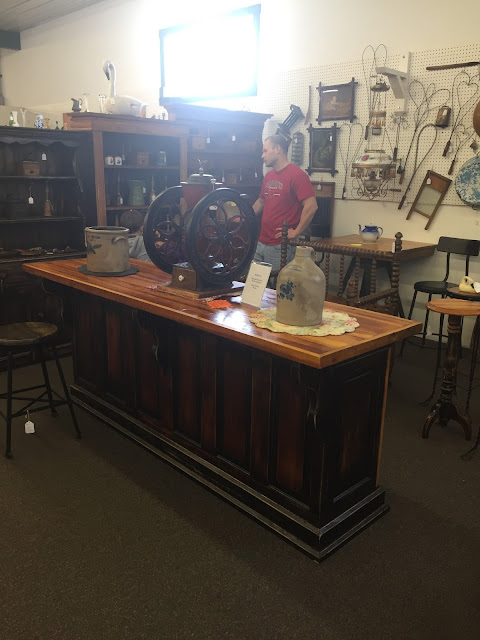 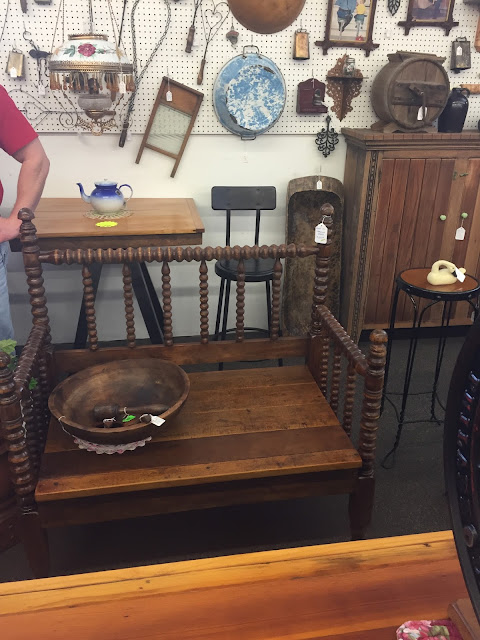 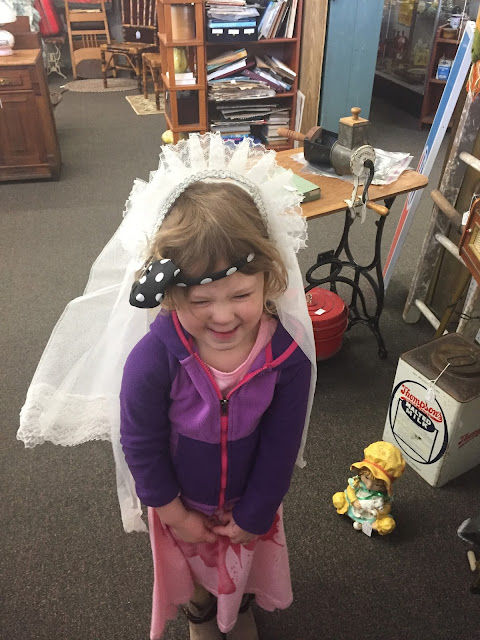 After visiting the antique mall we decided to head to an early dinner.

Buffalo Wild Wings it was! 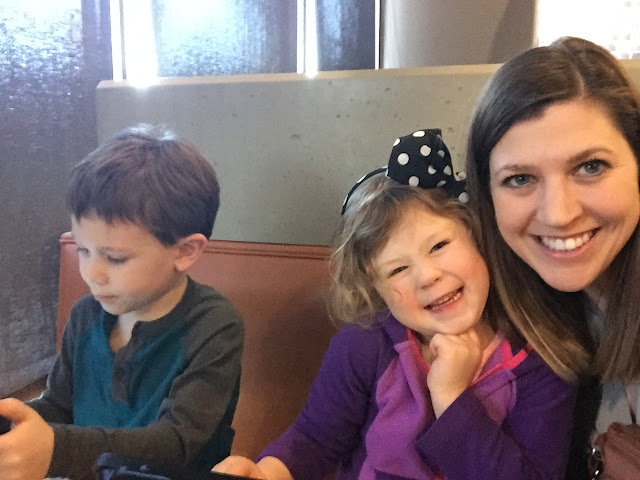 Anyone else love these tablets?!

My friend, Sara and her kiddos, introduced us to them and WOW!  They're awesome.  The kids were thoroughly entertained! 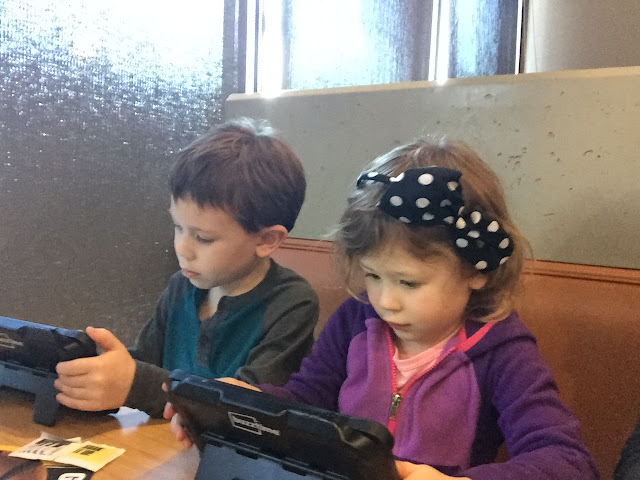 While the kids were doing that ^^^, Mommy was drinking this... 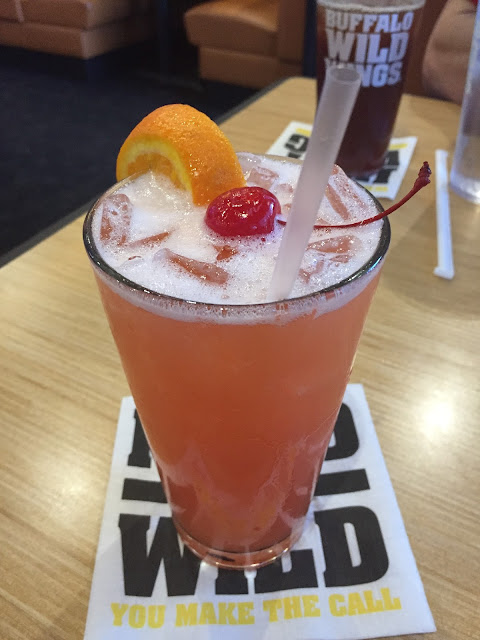 This drink was amazing.  I drank half of it and holy cannoli - my toes were-a-tinglin'!  This drink, Buffalo Zoo, was very strong, but sooooooo good.  I had to take a picture of the drink's ingredients because at the moment I was certain that I was going to try to make it at home, which I didn't and probably never will, but I tell ya', at the moment I was positive I should have one of these every single night!  Ha! 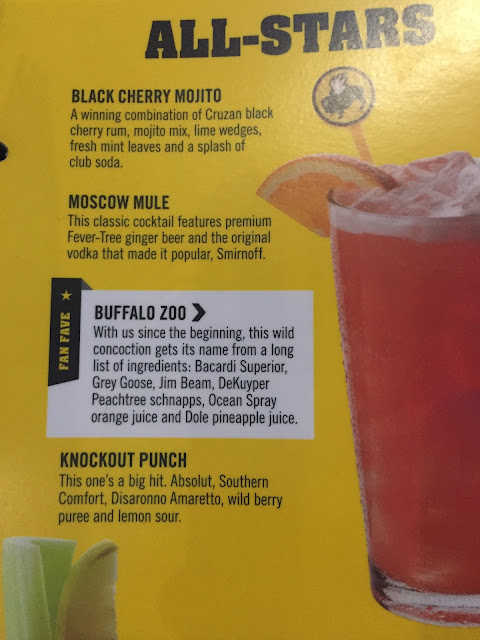 We came home and Jon and the kids had surprised me with brownies they had made for me earlier in the day.

Jon lit those bad boys with our handy-dandy butane lighter and then they sang, "Happy Birthday."  I honestly can't remember the last time "Happy Birthday" was sang to me alongside a dessert of any kind with candles to boot!  Maybe when I turned sixteen?!

It was so sweet and so perfect and wouldn't you know it, they used those silly trick candles!  Surprise, surprise.  ;) ;) ;) 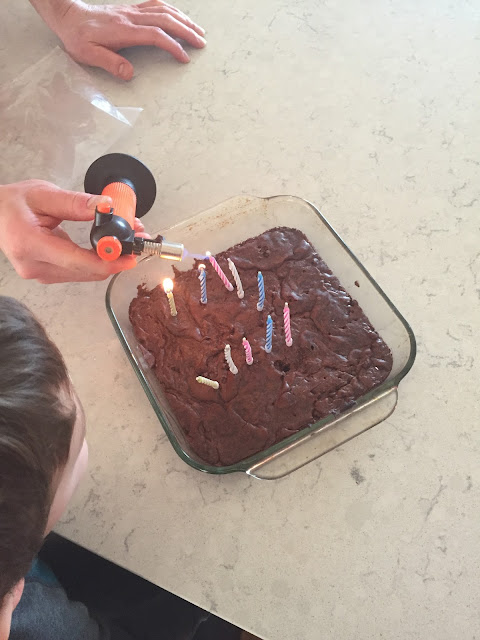 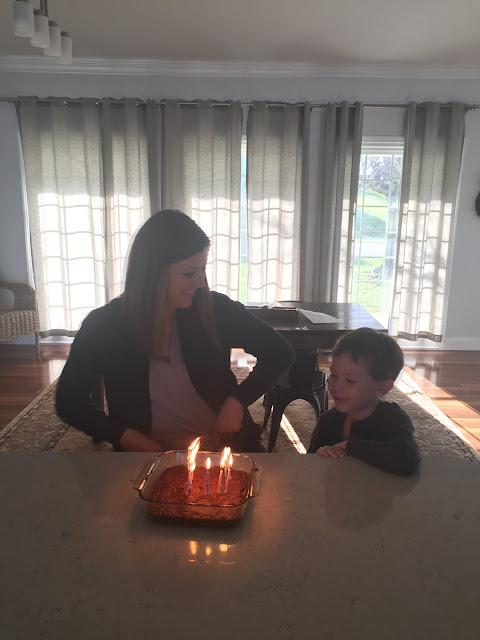 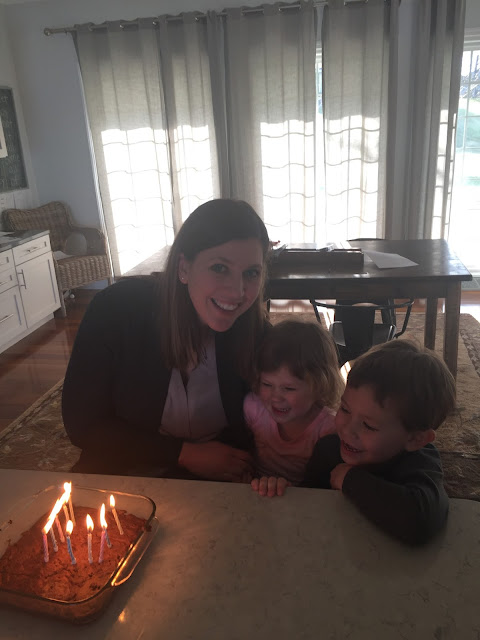 After enjoying some brownies and chocolate ice cream (I'm a chocolate kind of girl) we all settled in on the couch to watch some basketball playoff action.  I had no idea who was who, so I snuggled up with the kiddos and fell asleep on the couch for approximately 4 1/2 minutes...at 6:30 in the evening...which felt like an hour...it was a small victory...I could have slept all night...because I'm getting old...or it was that drink...let's blame the drink...because it was sssssssstttttrrrrooooonnnngggg!

Oh and I also forgot to mention that Henry had decorated the house for me with his very own homemade decorations!  I collected some that I had found from around the house and I just had to share the cuteness.

As you can see, we still sometimes write our numbers backwards, but I secretly love it...

And oh my gosh - the picture of me blowing out my candles with my hands up in the air...priceless. 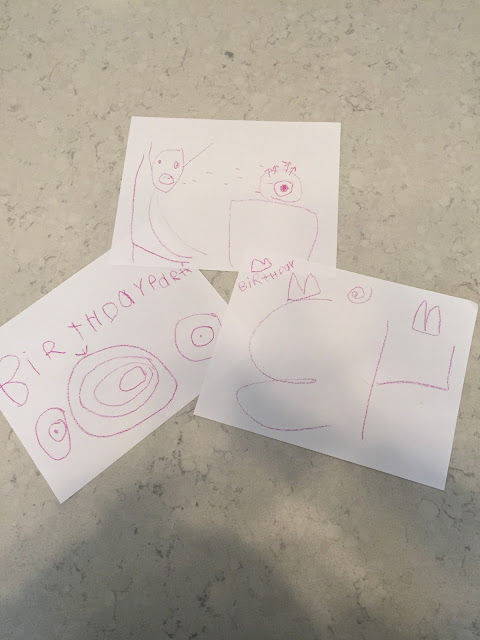 It was the sweetest, low-key day and I'm so very grateful for my little family.

They are my people.

They are my world.

My heart is so, so full.