It was to be the kids' first full five day week back to school, but some a few germs had their own idea.

You wouldn't have thought the week would be anything but butterflies and rainbows, but it quickly turned into fevers, throwing up, chills and naps.  Yuck.

Speaking of rainbows, check out this beauty that formed at the beginning of the week... 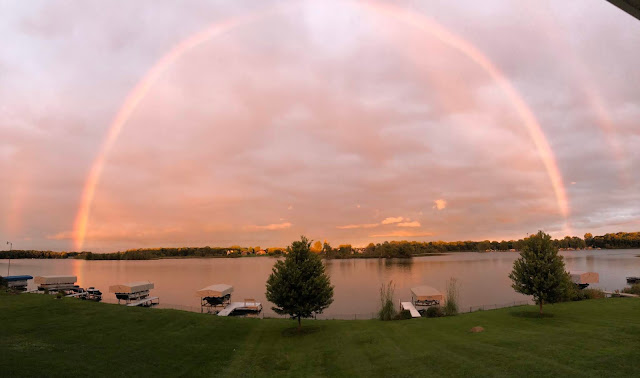 Henry had school picture day on Monday and I CANNOT wait to get his pictures back!  Eek!  The suspense, you guys, I'm so excited!

Also, check out Eliza's fall decorating behind Henry.  I guess I'm not using that switch any time soon.  LOL!

Later that Monday we were supposed to go to Little Ninjas for the first time, but Henry was complaining about a belly ache, so we stayed home.  Jon and I were completely content with this as we've been hesitant to join Little Ninjas anyway.  It goes until June, so we've been in no rush to sign up.

Later that night I started to feel a bit icky myself and I awoke in the middle of the night to Henry telling me he felt sick and that we felt like he might throw up...and throw up he did...luckily in the toilet.  TMI, I know, but the fact that we're not making it to the bathroom for this kind of thing is amazing.

I woke up Jon and asked him to assist Henry as I was feeling quite miserable myself...lots of chills.

The next morning I decided to keep Henry home for the morning to see how he would feel by about 11ish.  We still had to drop off Eliza at school which was tough for both of us.

Henry and I came home, I gave him a bath and then we both passed out for two hours.  TWO HOURS!  I think we needed each other to sleep in order for us both to feel better.  It worked.  I called the school and informed them that he'd be staying home for the remainder of the day.  We picked up some McDonald's for lunch and hung out watching cartoons for the remainder of the afternoon until it was time to pick up Eliza from school.

Brother managed to spike a fever later in the evening, but we gave him some medicine and he was asleep by 7:30.

By the next morning he was just about back to his normal self. 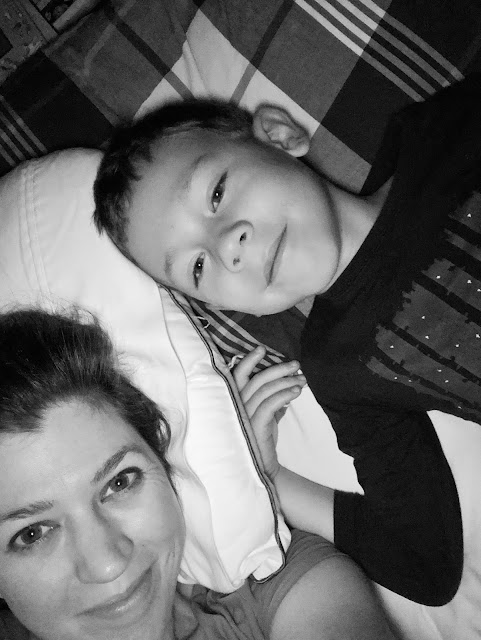 Wednesday was Eliza's school picture day!  I told her her jean jacket was optional and that it was up to her on whether she wanted to wear it or not.  We'll see...  Ha!  She has my heart. 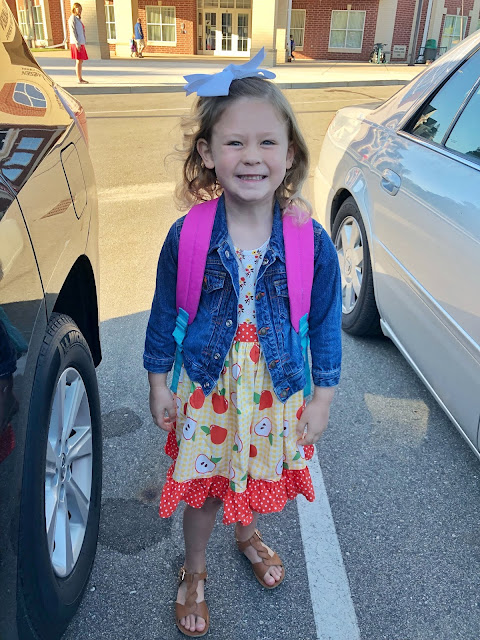 I spotted this sweet little hand in my mirror on the way to school on Thursday (don't worry I was stopped when I snapped this pic). 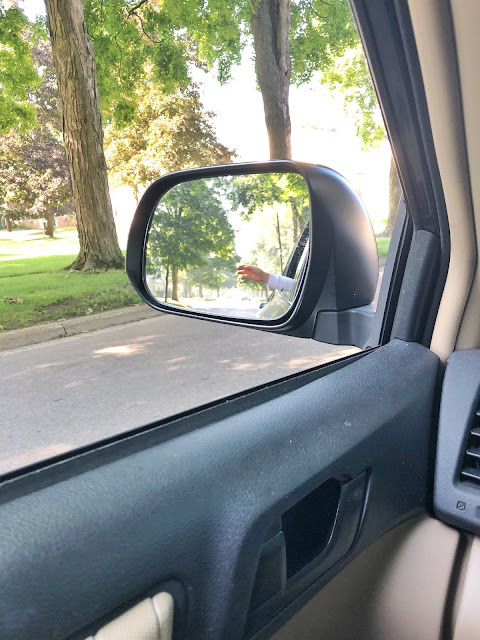 Girlfriend and her style.  Can you say, "Fancy Nancy?!"  Sometimes I have to tell her, "no," for certain outfits.  This one I left alone.  The layering and all the shades of pink and that bow.  Oh my gosh.  She's just so girly and I love her independence.  :) 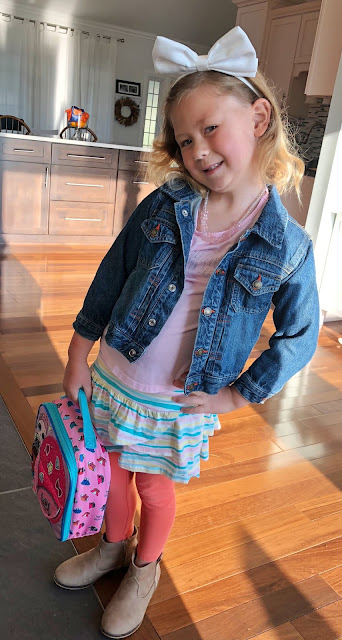 On Friday we decided to head down the lake for ice cream.  It took us probably about 45 minutes or so to get there what with a little bit of tubing and all, but for the most part we tubed right on down the lake. 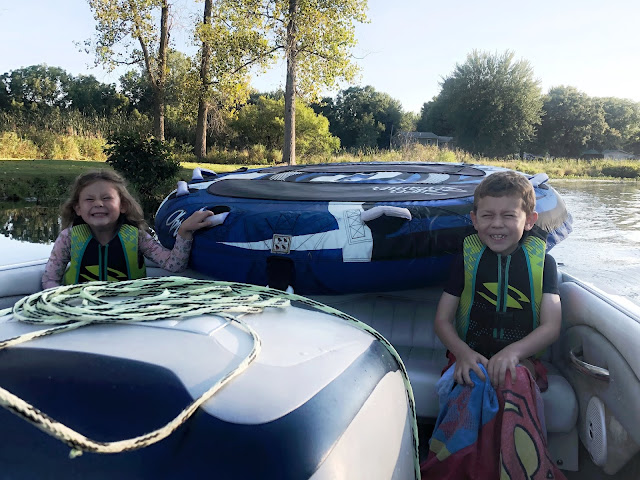 We made it to the ice cream store just in time, too.  They closed at 7 and Jon and I didn't really put it together that their times had changed after Labor Day!  Phew! 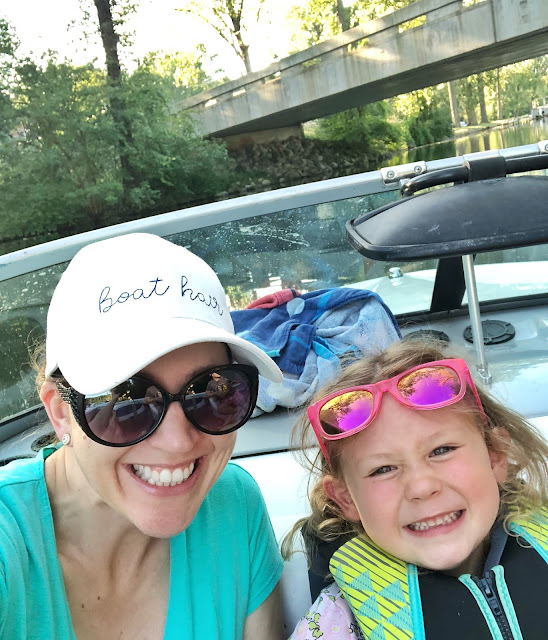 We tubed back home and let the kids ride through all the channels... 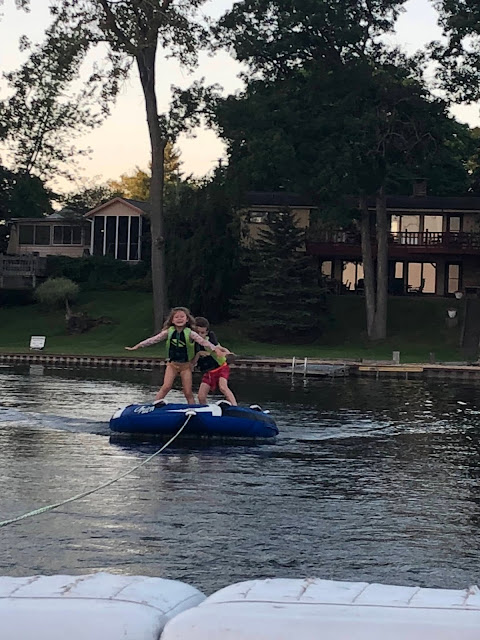 On Saturday we attended our local AppleFest. 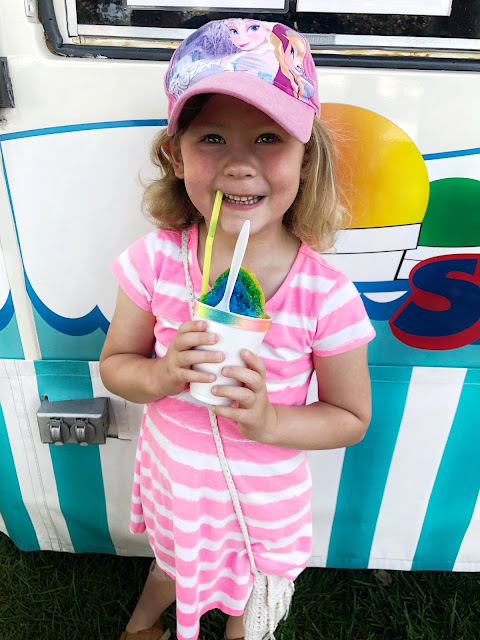 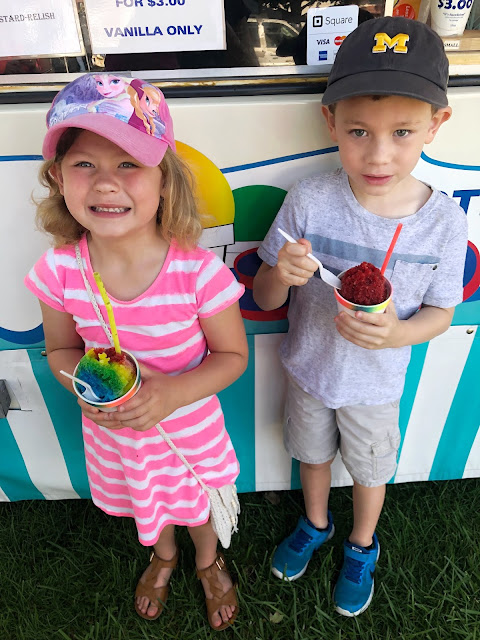 There were lots of good finds... 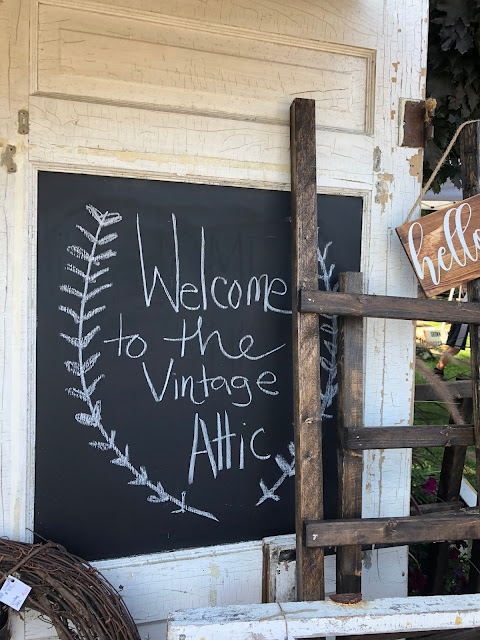 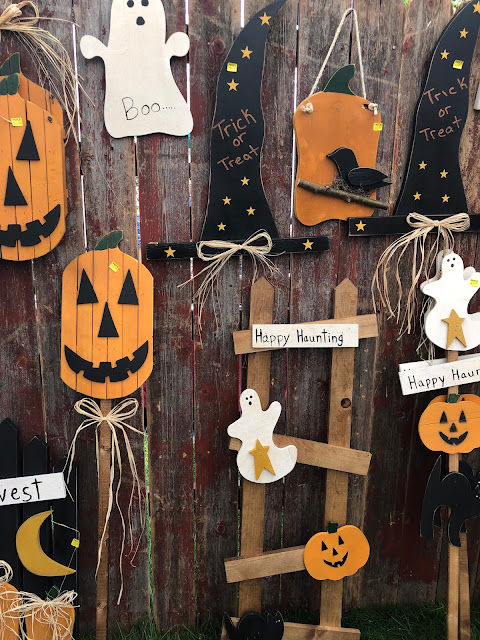 Eliza brought her purse and wallet and informed me that she also brought along five dollars of her own money.  She ended up buying some cat ears...although she had to borrow $1.50 from Jon to make the entire purchase.  It was adorable watching her get out her dollar bills to pay. 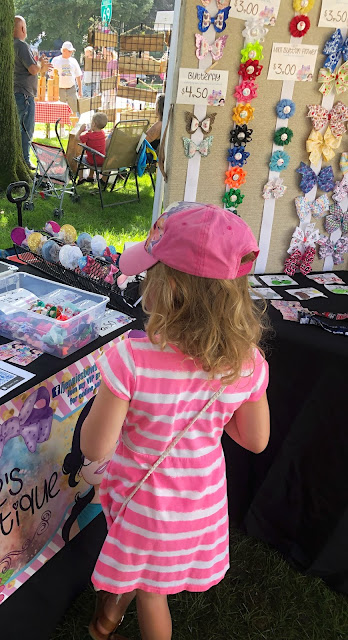 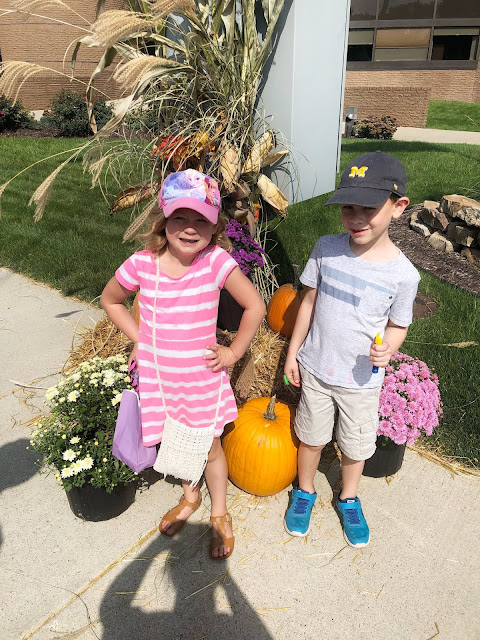 For lunch Jon and I headed over to a local church that was putting on a Mediterranean meal.  It was fantastic and the woman who cooked it all would love to open up a restaurant!  We desperately need more restaurants in our little town and let me tell you - my heart has a special place for Mediterranean food - I soooo hope it happens!

Once home we cleaned up the house and turned on the Michigan game.  My sister and her family came over to visit for the night.  It was nice to catch up and see all the kiddos!

We woke up on Sunday and just hung out.  We got out on the lake and swam a bit and got in some tube rides before my sis and her fam had to hit the road.

Jon and I forced the kids back out on the lake and on the boat as our warm summer weather is coming to a close later this week.  I even forced myself to swim since I knew for a fact that after Thursday there would be no chance of me getting back in.  So we all did it to say we did.  We're always trying to stretch out our lake time for as long as possible (although I'm craving fall temps).

Oh and check out this picture I got of Jon jumping in the water!  Doesn't it look like he's standing on it or it's photoshopped?!  So cool!  Of camera phone, you're so cool. 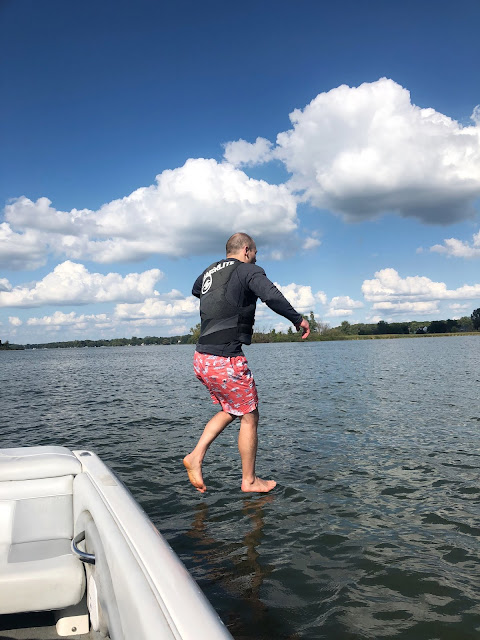 What a great summer we had over here!