It's Monday and I actually have a little life lately/weekend recap ready to share!

Last week I finally read to Henry's class for "March is Reading Month."  LOL!  Better late than never, right?  Oh my goodness, you guys, it was so much fun.  Although, for some weird reason I was really, really nervous.  My shaking was visible and I had to hold my first story/book with both hands due to the uncontrollable shaking...in front of a bunch of first graders!  What's up with that?  Does anyone else get nervous like this?

Anyway, we had so much fun and I loved getting to see my little man at school... 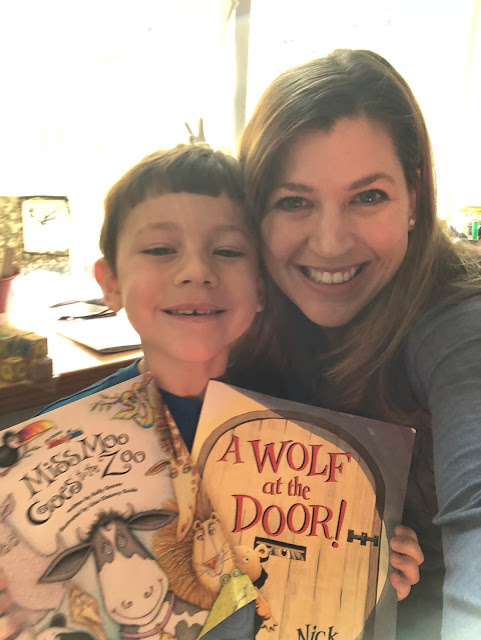 On Wednesday I took Eliza to dance class.  Jon's been taking her on Wednesday evenings so that I can stay home and get some cleaning done and spend some quality time with Henry.  Eliza had asked me a few days earlier if I could take her to dance and I, of course, obliged.

It's always so fun to watch all the kids dance and I just love, love, love the studio! 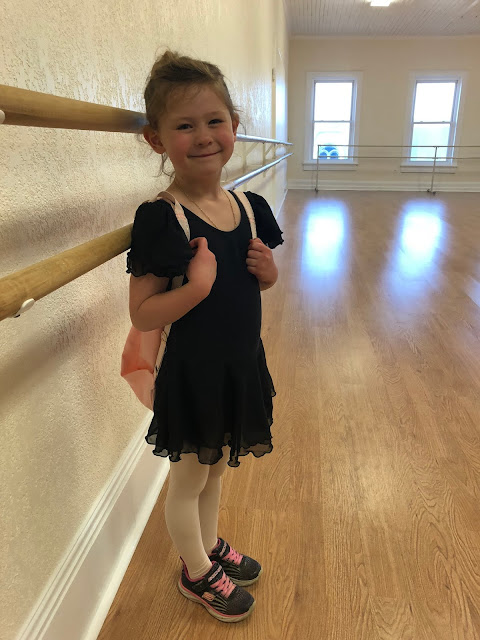 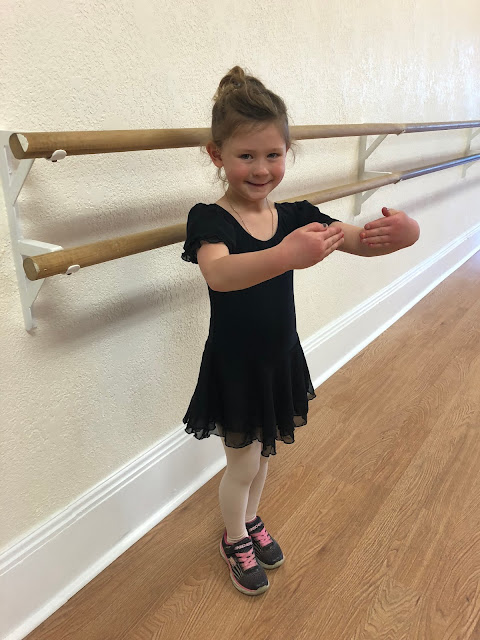 On Thursday Henry's class took a field trip to a bowling alley.  Eliza attended his field trip with me and she was such a trooper.  She sat quietly as she watched Henry's class bowl for over an hour.  I was in charge of a group of five kids and they were all such good little bowlers.  They took turns, cheered each other on and I never had to remind them who's turn it was next.  They had it all figured out!

My little Henry was being so silly.  He was dancing and giggling.  Do I dare say he was being a little ham?  He's such a funny little guy lately... 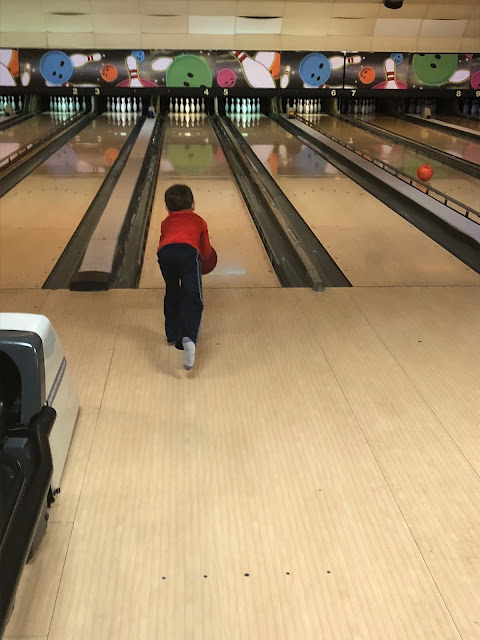 Eliza and I went grocery shopping and she was adamant that we sport matching jean jackets and matching headbands.  She picked out bright pink for me.  I did take it off while in the store, but wore it the rest of the morning and into the afternoon. 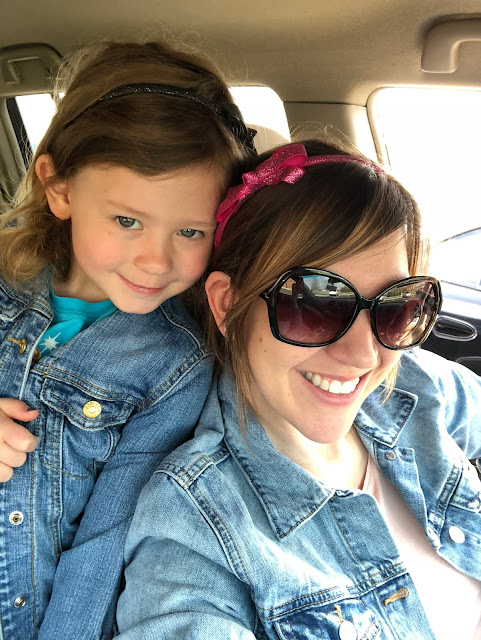 I recently joined a, "100 Mile Challenge."  My neighbor set up a challenge for a group of friends (and my BIL and sister) to run 100 miles by June 1st!  You guys, this challenge is going to be tough.  Not only do I have to log the miles, but more importantly, I need to find the TIME to log the miles.

After Henry's bowling field trip I asked Eliza if she wanted ride in the stroller while I ran in the park, but she preferred to ride her bike.  She was warned that I wasn't planning on stopping and that she couldn't go potty in the middle of my run.  She agreed to the terms.

We got to running/cycling and about twenty seconds into it, Eliza's bike became wobbly and I had to stop.  I may have had a bit of a "teenage Marie moment."  I was a little annoyed (not at her, but rather at her bike) and told her we were done and that it wasn't going to work.  She cried, I consoled her, I tightened her training wheels, she wanted to keep going, I gave in, we walked back to where we started and we gave it another go.

Eliza WANTED to ride her bike while I ran.  She was trying so head and I think she really wanted to prove to me that she could do it.  I tightened her training wheels about eight more times while out on the route and I just kept running and running.  Eliza giggled, encouraged me to keep going and kept her little legs-a-pedaling.  We finished at three miles and just under thirty minutes.  Eliza rocked it and I was so proud of her!!!

We ended at the park and our run/bike ride couldn't have turned out any better... 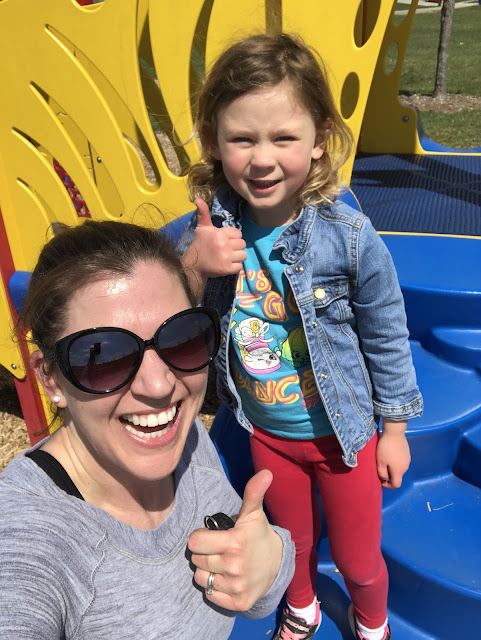 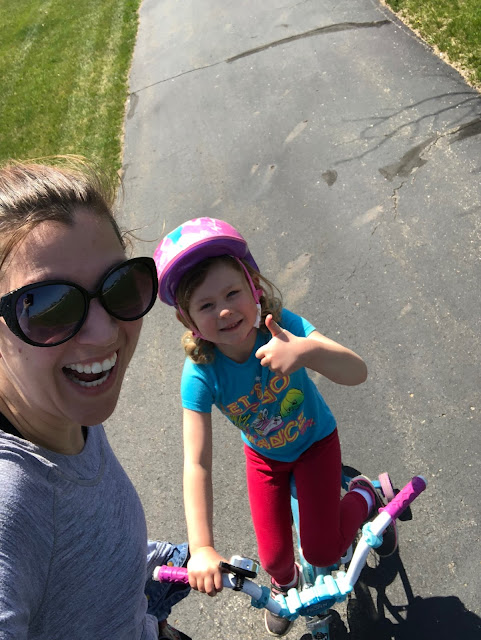 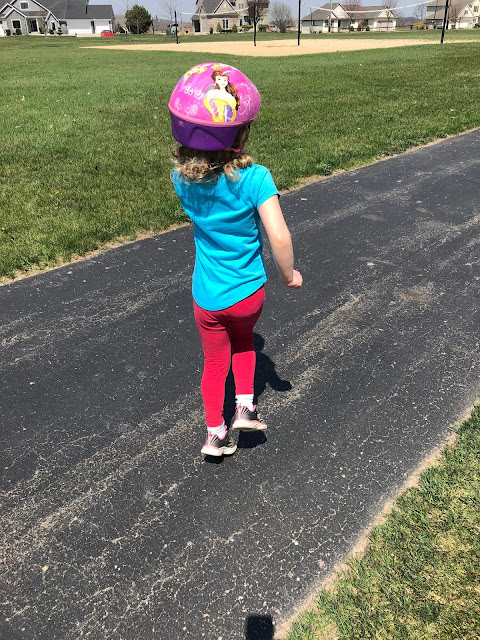 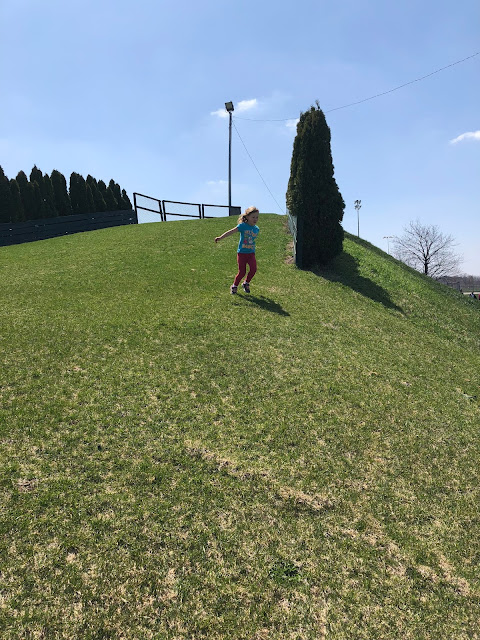 She picked me some beautiful "flowers." 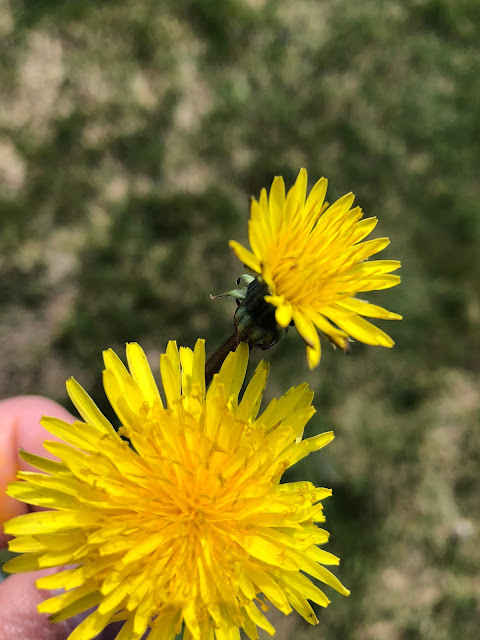 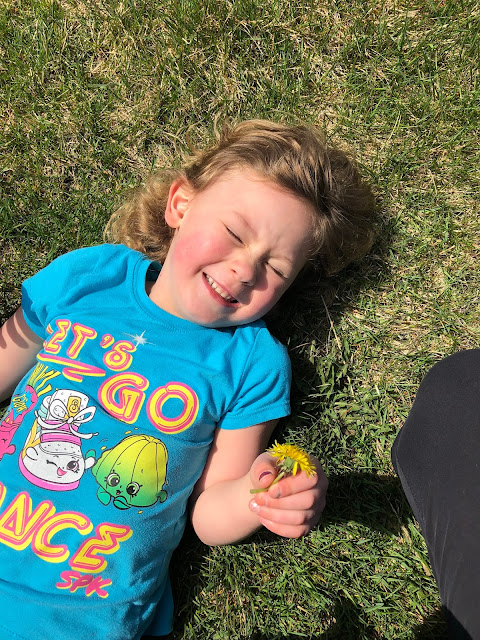 Jon and I have been loosely talking about changing out the siding on our house in a year or two.

We're getting new shingles any day now and a much needed new concrete driveway in three weeks.  It's been a long time coming and we're so excited, but I'm terrified that I'm making the wrong choice for our roof color, so I'm trying to think ahead to the siding to guarantee a future cohesive look.

I've known for a while now that I want...ahem - we want ;)...an off white color for the siding, but I'm just having a reaaaaally hard time finding exactly what I'm envisioning in that noggin of mine... 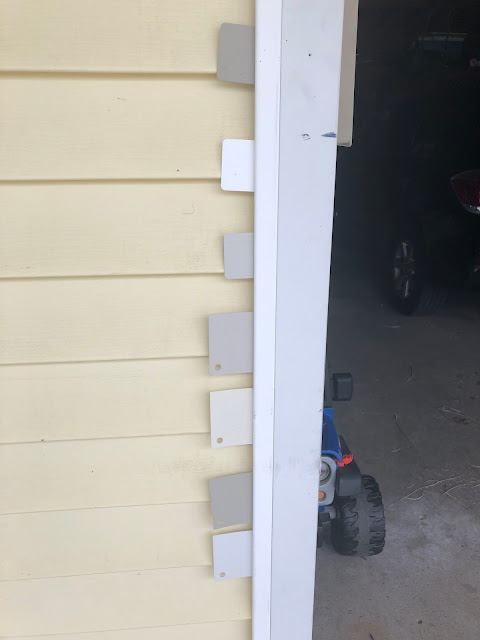 I bought this new light fixture from Wayfair when they had their Way Day last week!  I scored this  fixture for $76, not too long ago it was a little over $300!  Whaaaat!?! 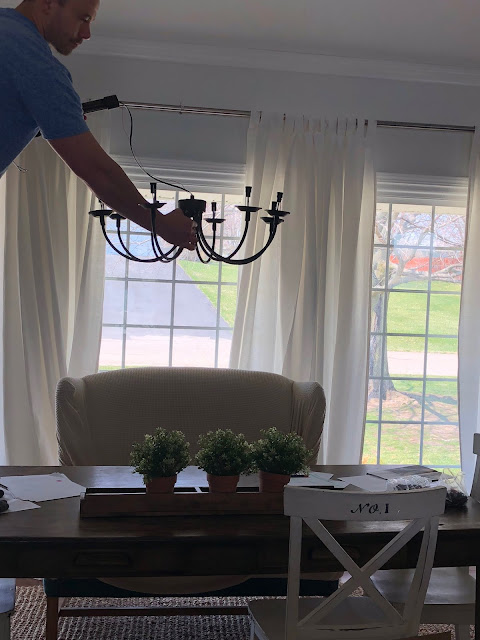 On Saturday I ran a race and pushed the kids in my handy dandy running stroller.  Henry wanted to run, but I wasn't quite sure if I wanted his little body running an entire 5K.  I kept him in the stroller for the first mile, ran up one more hill and then told him that he could get out and run.

I thought for sure he was going to get tired and slow me down, but boy was I wrong!  He only got in the stroller once and then he was quickly back out again.  You guys - he ran just under two miles!!!  I couldn't believe it!!!

I hadn't actually signed him up for the race, but I'm thinking he should try out a one mile fun run sometime in the near future... 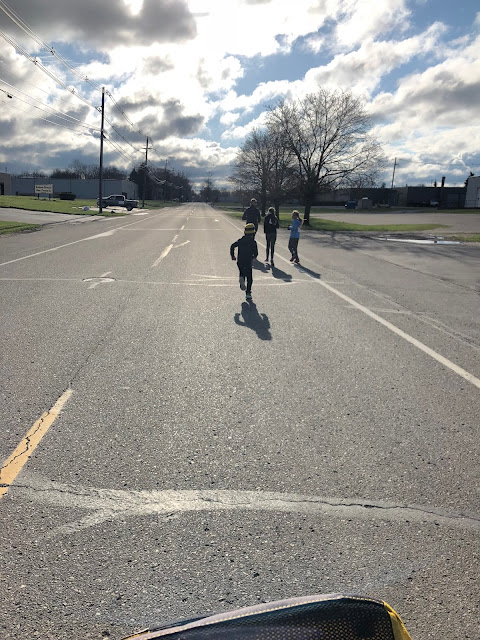 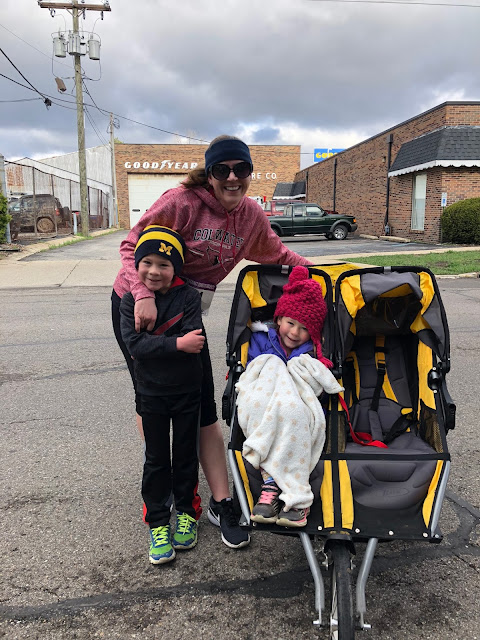 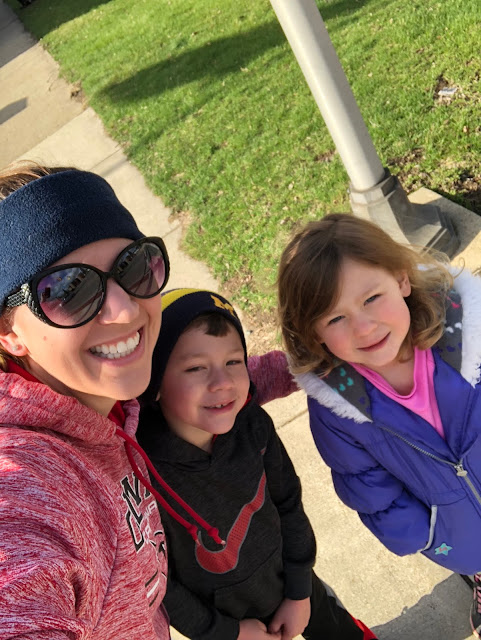 On Sunday we slept in, stayed in bed for far too long and cuddled.  The rest of the day was spent playing outside and moving at sloth speed.  It was perfection. 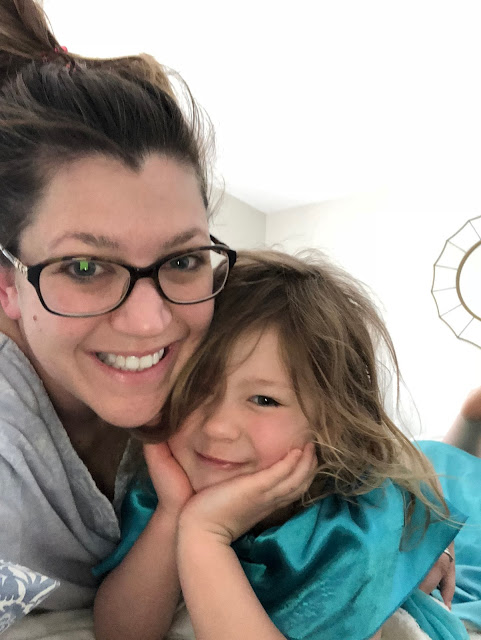 That's it for now, friends!  Thanks for stopping by!