Happy Tuesday to one and all!  Who else was excited to wake up to it being Tuesday?  Oh man, I love that today is Tuesday!  It also means that we've got a short week ahead of us - WOO-HOO for that!

I sure do love me some weekend!

As for today, it's a tad gloomy outside and a bit of rain is currently headed our way.  Honestly I'm okay with it since I pretty much neglected our house the entire weekend and now I have about a gazillion things to check off my "to-do" list.  Ahh!

Let me tell you that I've been sicker than a dog for well over a week now...and I'm STILL kind of sick.  I have this sinus pain that just won't quite, not to mention a lingering cough that seems to want all of my attention.  I get it already, cough.

Complaints aside, let's talk about something fun and happy, how about our Valentine's Day?

Valentine's Day was pretty special over here.  I set out a few little gifts for the family the night before.  We ate breakfast, got dressed for school and then I let the kids open their little bags before heading out the door.

As you can see, Eliza wore her new dress that I had just recently purchased from Amazon and I tried to squish Henry into an old size 3 Valentine's Day shirt.  *face palm*  He wore it for this picture and then I thought he looked really uncomfortable so I had him take it off and change his shirt for a plain red and white striped one instead.  He seemed relieved, to say the least. 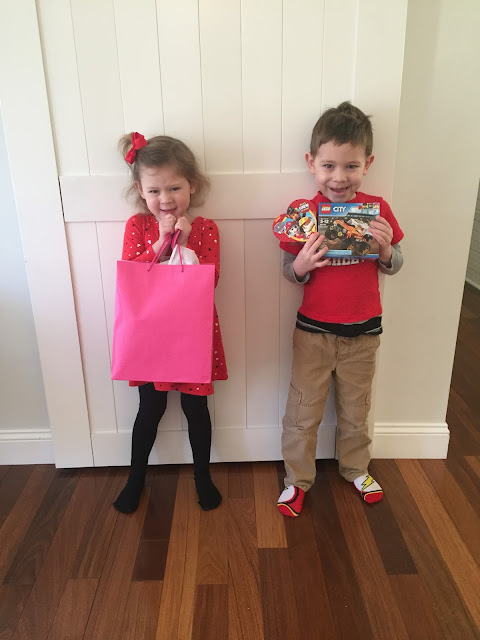 I also stole Lindsay's idea, from over at Lindsay's Sweet World, and whipped up these cute little tags over on PicMonkey to use for some small teacher gifts.  Being the idea thief that I am, I also filled the bags with 100 Grand and PayDay candy bars and lottery tickets.  Lindsay, if you're reading this, I've mentioned you in my last two posts.  Lol!  I promise I'm not a stalker, you just have really good ideas!  Hahaha! 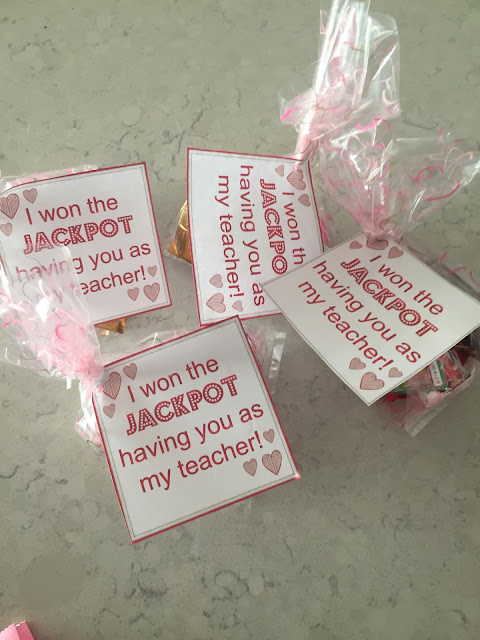 Later that morning I picked Eliza up from school and this was our Valentine's gift from her...  So cute, right?  :)  It was filled with Hershey's chocolates, which by the way, she did not share.  I think she thought it was for her.  I mean, I don't blame the girl... 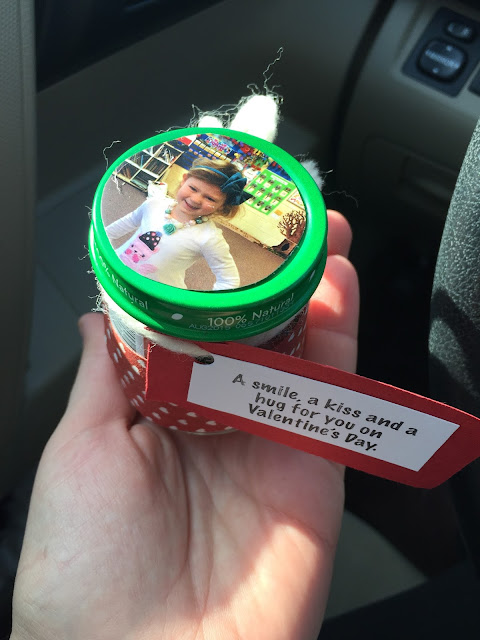 Once we arrived home we sorted through her cards and treats... 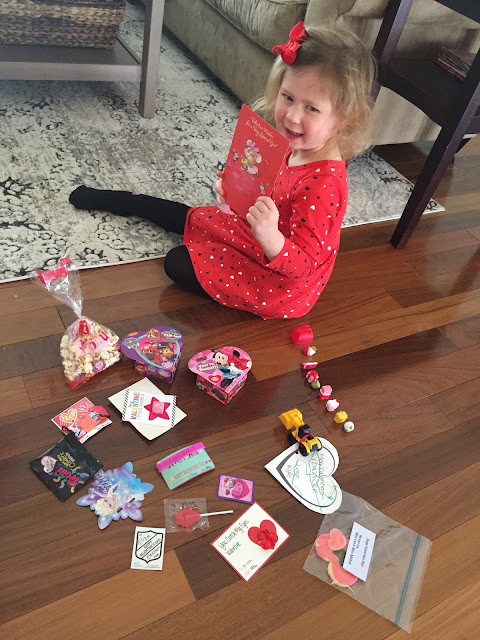 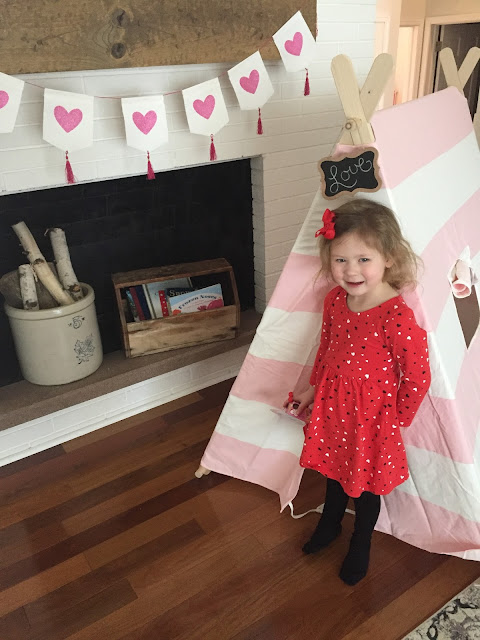 ...and played with her newly gifted Valentine's Day Shopkins...while Mama sipped on tea, blew her nose, coughed and sneezed.  But as you can see, I used my Valentine's Day mug to celebrate what I could while feeling lousy. 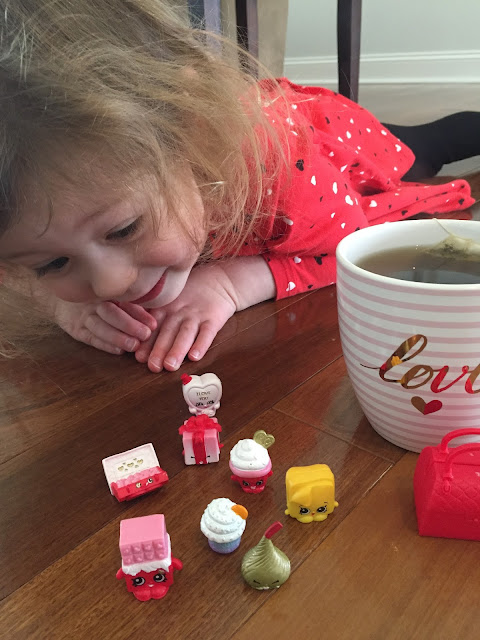 Jon came home for lunch, thank goodness, and I literally passed out on the couch for thirty minutes.  I was spent.

Side note:  Being sick with kids is no joke.  I feel like I've been sick all winter long and I've yet to fully recover.  Sometimes in the midst of feeling miserable I try to remember what it was like to have an entire day to be in bed.  You know, it's like imagining a waterfall when you're stressed, instead I daydream of uninterrupted and unconscious rest and sleep from ten o'clock in the morning to three o'clock in the afternoon.

After the slowest afternoon ever, we left to pick up Henry from school and he could.not.wait. to dump out his Valentine's Day cards and goodies. 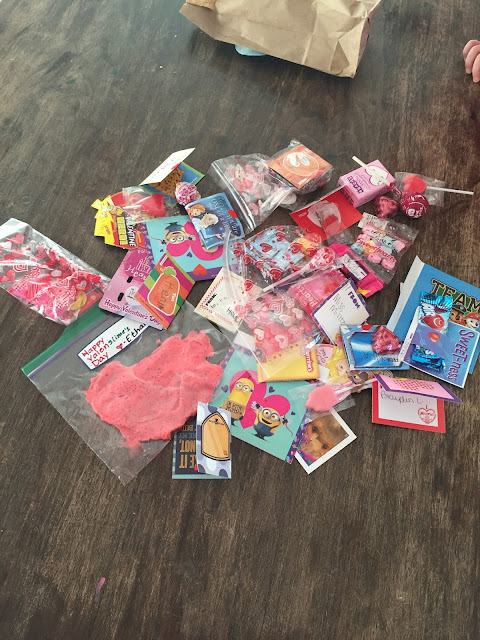 On Wednesday we prepared for Henry's 100th day of school!  We were told to bring in 100 items.  So I found this bag of stickers on sale from one of our local grocery store's Valentine Day section.

Brother loved counting out rows of tens.  Once he finished, we gathered up the stickers, put them in a bag and set them next to his backpack.  We were ready to go. 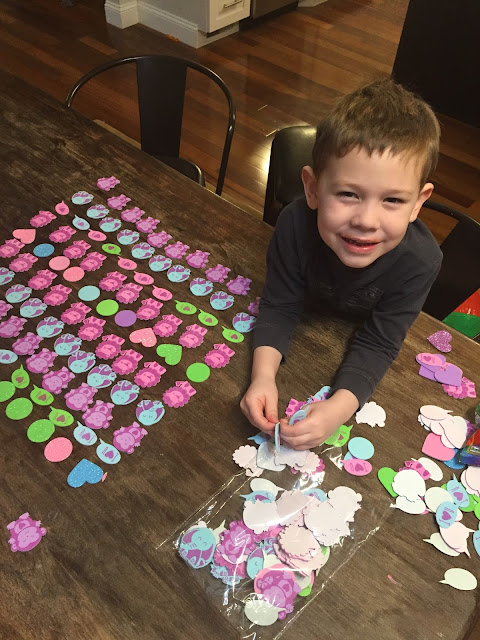 On Thursday, I, along with my girl, Sara and her Mother-in-Law, Kathy, went in to volunteer for the kids' 100th day of school.  We were informed that the teacher had decided not to use the 100 items.  She had other activities planned instead.  Lol!  Well, at least all the counting was educational for Henry, right?!

Oh and I'm still laughing, because the table I volunteered at was super fun, but it took me until the last group of kids to actually find a groove.  It also brought to my attention that I had been doing the activity wrong.  Oh my word.  Leave it to me to mess up a Kindergarten activity!  Henry's teacher didn't care at all...thank goodness.  Oh man.  Once again...*face palm*  I would blame my sickness, but to be honest, that's just something I would do!  LOL!

As I was leaving I told her that her "worst parent volunteer" was leaving...meaning me, of course.  Haha!  Moments like this are the reason wine is so badly needed on the weekends.

In the end I had a great time in Henry's classroom and he loved seeing me.  I'm getting to know the kids and I'm also learning more of what goes on Henry's classroom, as well as what we need to work on with him.  So, overall, I'll call it a win.  :)

I love this little man so much!!!! 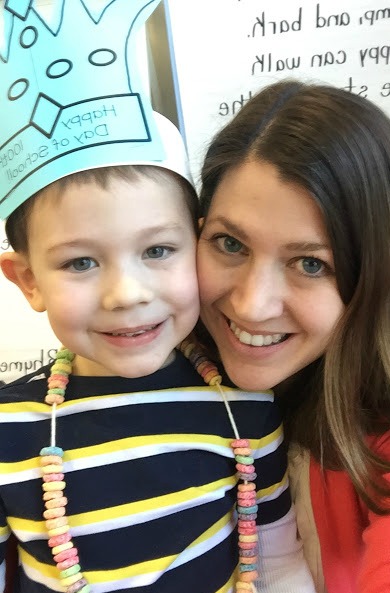 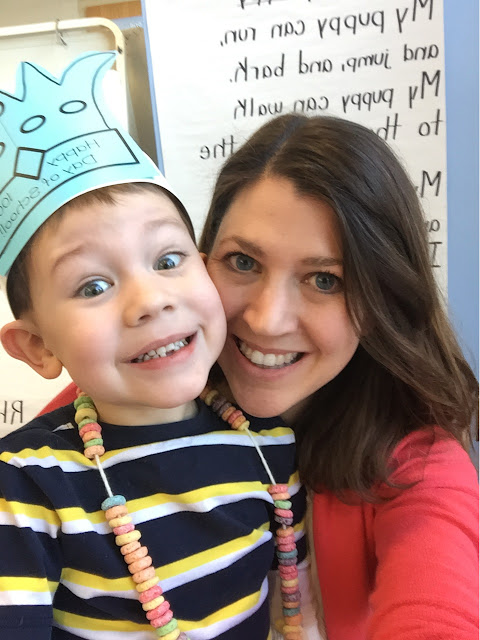 On Friday I met up with a friend of mine, Katy, at a local coffee shop to discuss details of a nursery we're putting together for a friend of ours.  Said friend is giving us $250 for a nursery makeover!  Oh my gosh we're so excited and we've since started calling ourselves Chip and Chip since we both act more like Chip Gaines than that of the queen bee herself, Joanna Gaines.

I sipped on the best tea I've ever had while we discussed our plans for the room.  Well, technically, over the course of an hour we probably only discussed the room for about fifteen minutes due to a few people at the coffee shop coming over to my friend Katy and mingling with her.  I tell ya', she's the belle of the town!  Everyone loves Miss. Katy!

Later that day I headed over to Katy's awesome house so we could figure out some paint colors.  I wasn't much help...well, other than leaving her with a little less wine in her fridge.  ;) 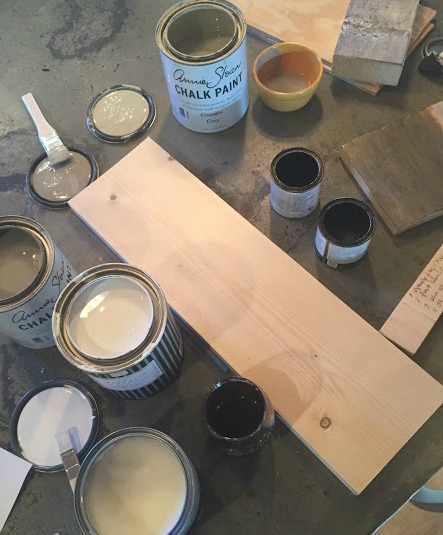 On Saturday and Sunday we headed to the park.

It was 60 degrees.
Both days.
In Michigan.
In February.
It was a dream. 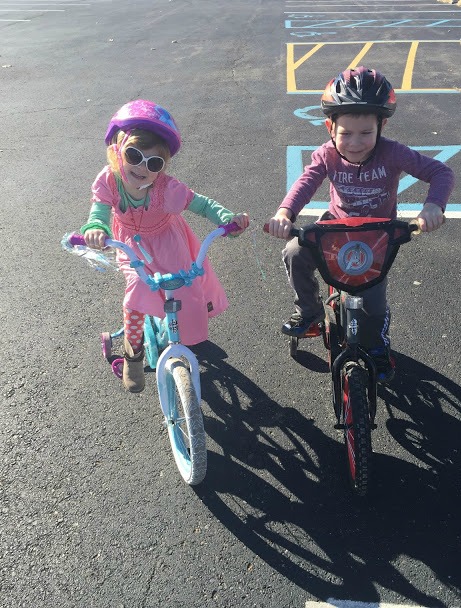 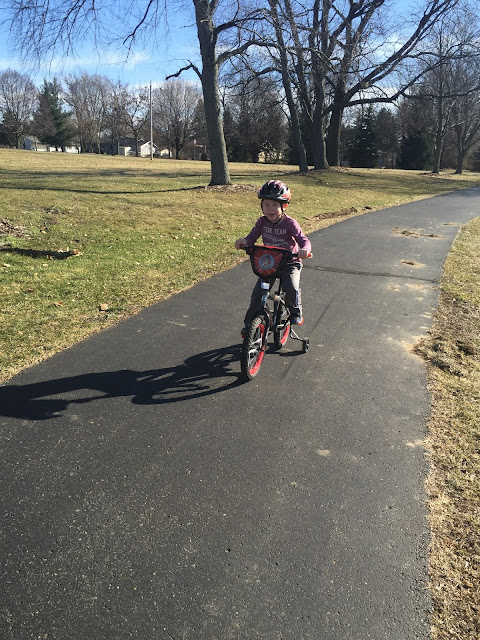 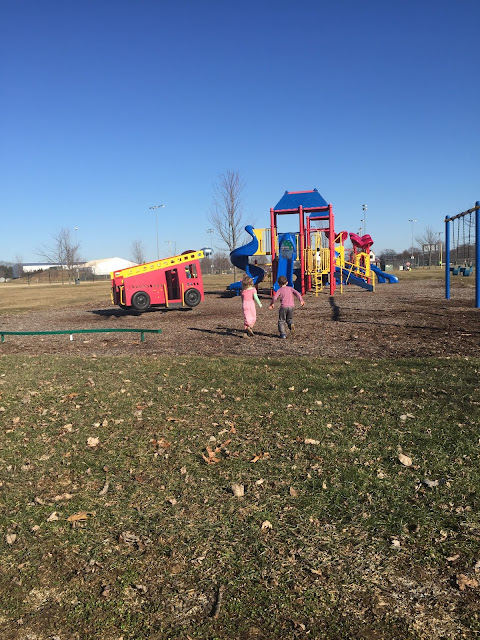 My sister and two nephews came into town on Sunday afternoon and we let the cousins play and play!

Later in the evening my sister and I played a bit on Snapchat. 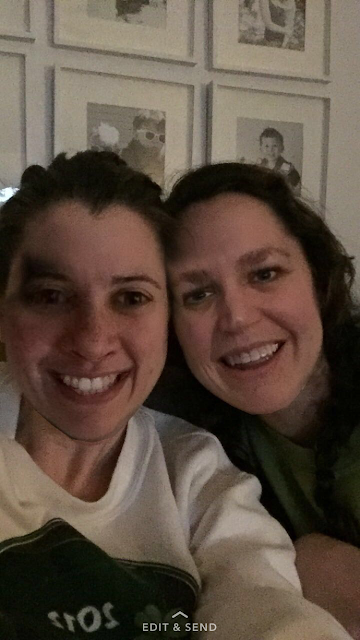 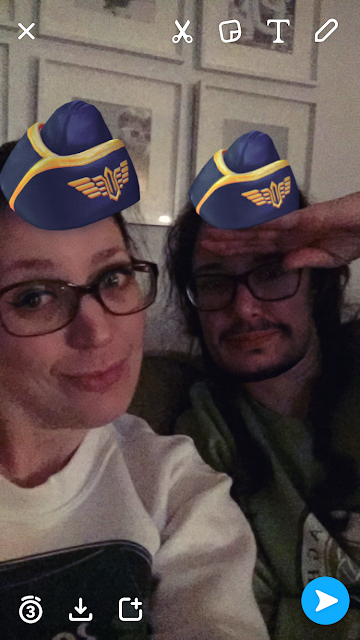 Does anyone else think the Snapchat filters are the best things ever?  They crack me up and they always, ALWAYS make me laugh!

On that note, I'll see ya' later this week!

I'm linking up for the Tuesday Talk link up. 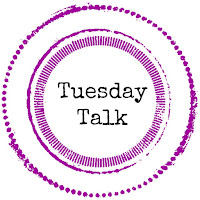