Today I'm linking up with Andrea from Momfessionals for the Share and Tell Tuesday Link-Up to share with you the loves of my life.

Here we go - I'll be starting with that handsome husband of mine, Jon.  ;)

This same guy, waaay back in the day, also covered that same front porch with lilacs (one of my favorite scents) just to make me happy.  We've danced under the stars in the middle of nowhere, we've eaten dinner in the middle of our high school football field, we've laughed, we've cried, we've struggled, we've survived this thing called life...this thing called marriage.  This fella' of mine has a heart of gold and dance moves like no other.  Jon and I are complete opposites in almost every way and I can guarantee you that if you were to meet us, you'd never guess that he's the one who keeps us laughing over here.  He's adventurous, kind, hard-working, curious, smart and patient.  He's an amazing husband and an even more amazing father!

I can honestly say, without a doubt in my mind, that our kids are his absolute favorite people.  He loves our kids more than anything in this world and I love him that much more for loving them so deeply. 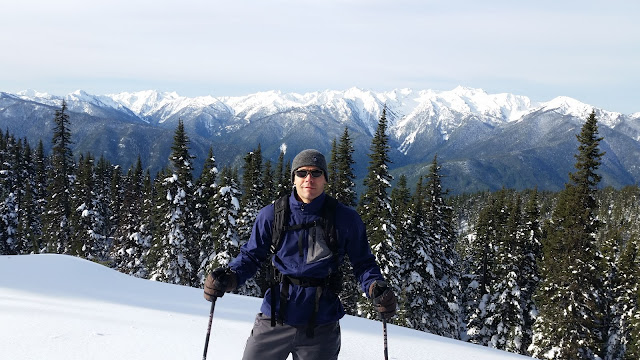 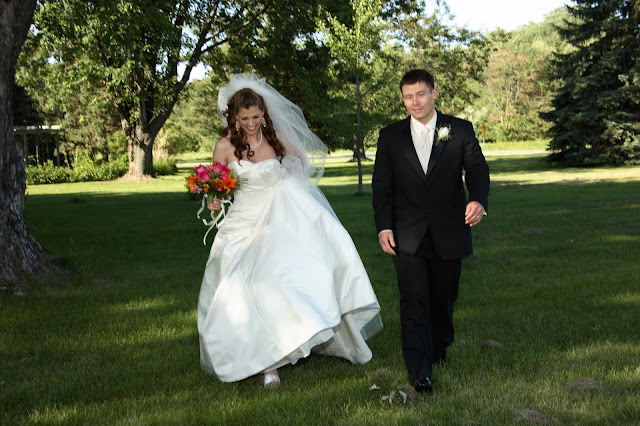 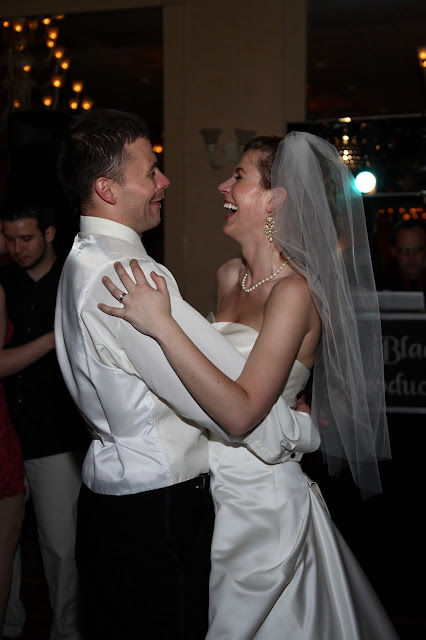 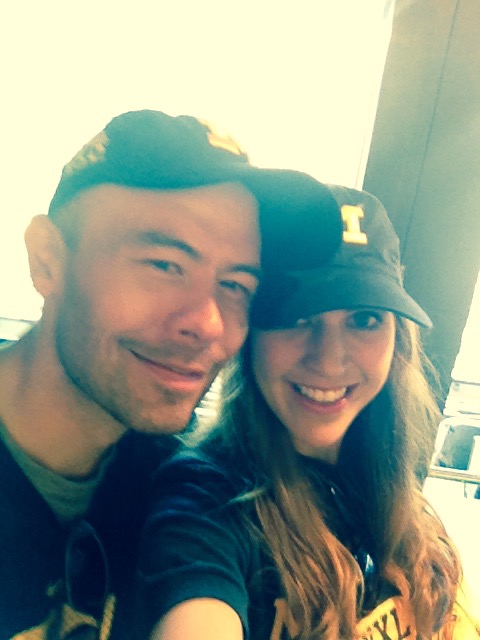 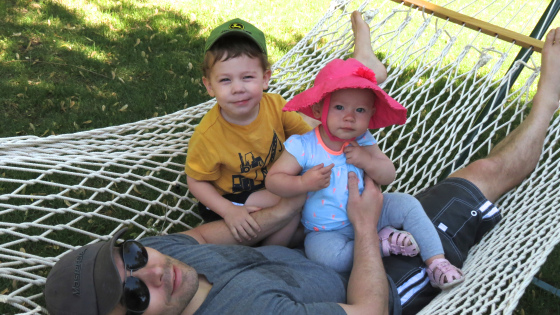 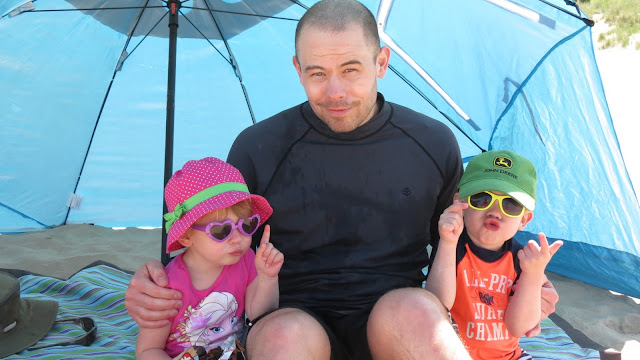 Oh my little Henry.  Henry came into this world on May 7, 2011.  On that day, I became known as, Mom.  To be completely honest, I had NO idea what to do with him.  I had no idea how to "mother."  As the days, the weeks and the months went by we gradually got to know each other more and more.  We ultimately fell in love and I can tell you the exact moment that led to my never-ending love for him, but that story is for another day...

This little boy of mine is so tender and sweet.  He's always willing to help others.  He's silly and gentle.  Henry has always given the best hugs and he excels in the cuddle and snuggle departments.  I hope to raise him to be empathetic and kind and let me tell you, he's proving himself of these two things on a daily basis.  I miss him and worry about him throughout the day, but I know he's happy...and that's all I care about.

This smart little boy of mine is growing up with no intention of slowing down.  He loves to build and create.  He's curious and eager to learn.  Give this boy some cardboard, tape and scissors and he's happy for hours.  He's always asking about the factories we drive by here in town and what they "make" within them.  Henry's also always asking Suri to show him a "machine."  This kid loves machines.

I swear I knew this boy before he even arrived on that beautiful spring morning back in May of 2011.  He's a dream of a little boy and he keeps me smiling every.single.day.  I mean, with that smile of his, how could I not reciprocate? 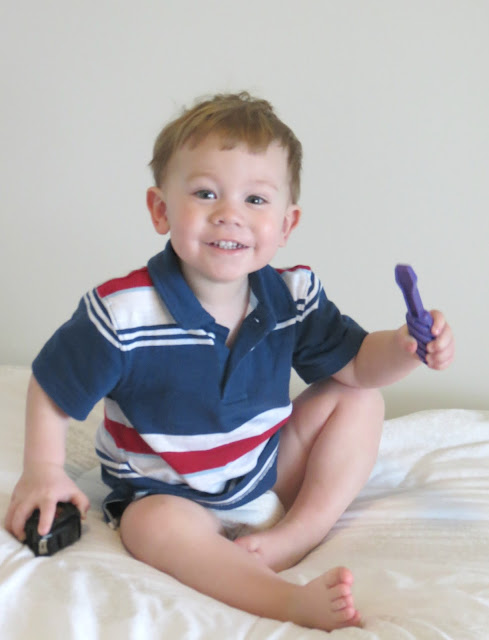 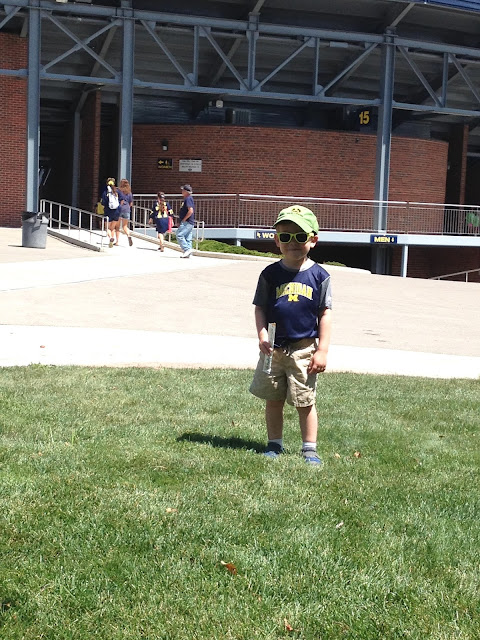 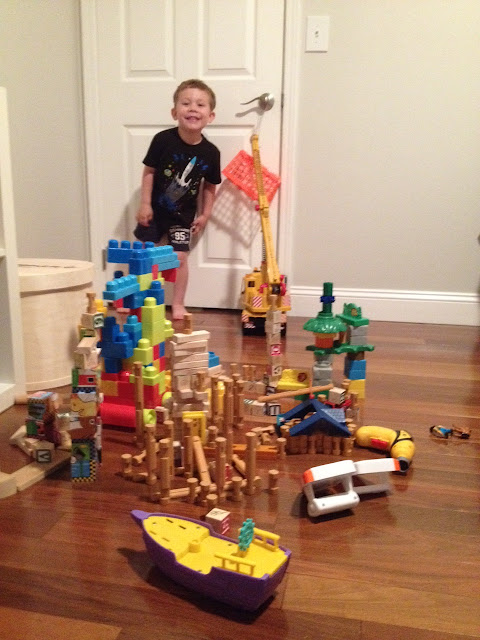 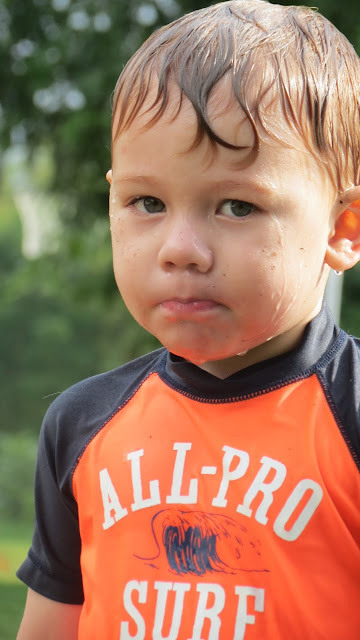 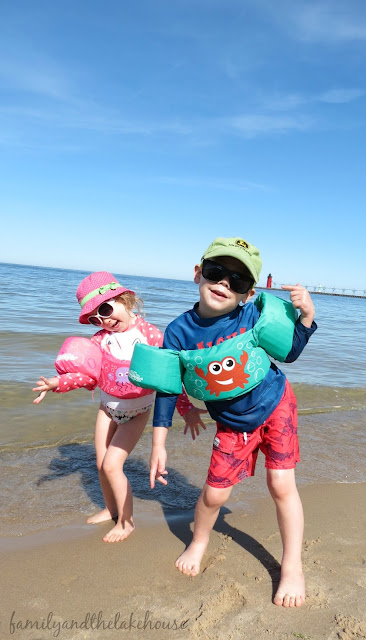 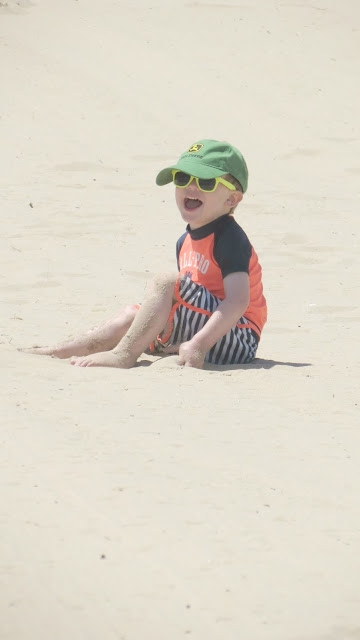 This little ball of energy and sass is Eliza.  Eliza arrived somewhat quickly on May 30, 2013 and hasn't slowed down since.

This girl keeps me on my toes every waking hour.  For real...it's exhausting.  There was once a time she loved to snuggle, but I quickly learned I was her primary food source and once the nursing ended so did the snuggles (which is also why I nursed her for two years - because...#selfish).  She eats all day, every day.  Let me repeat that - this kid eats all.day.every.day.  I've never met a three-year-old who likes to eat sardines, salmon and whey protein shakes with their Daddy.  This girl will eat all the things...and she does...I'm guessing it gives her all that energy?  Ha!

Eliza loves to play dress-up and pretend she's a princess, which is perfect, because in my world, she is my princess.  Eliza is always, alwaaaays singing, putting on a show and batting her eyes...not sure where she gets it from... ;)  There's not a day that goes by that she's not wearing something shiny, sparkly or princess-y.  She's outgoing, confident, spontaneous and she's most definitely made of sugar and spice and everything nice.

She's becoming more and more aware of her surroundings and I've recently noticed her stepping out of the spotlight to access the world around her.  She's smart and silly and an absolute delight.  I'm in love with this little-squishy-faced-sardine-eating-three-nager more than I could ever say. 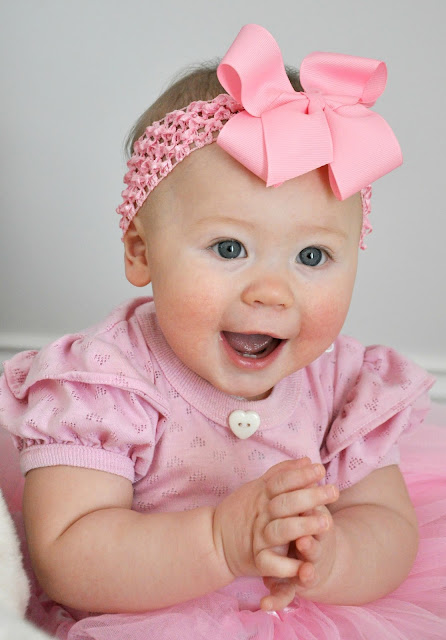 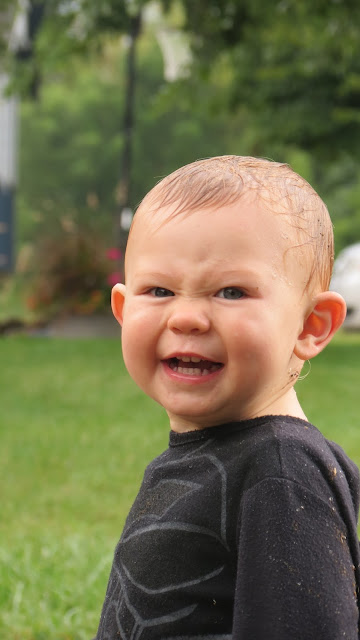 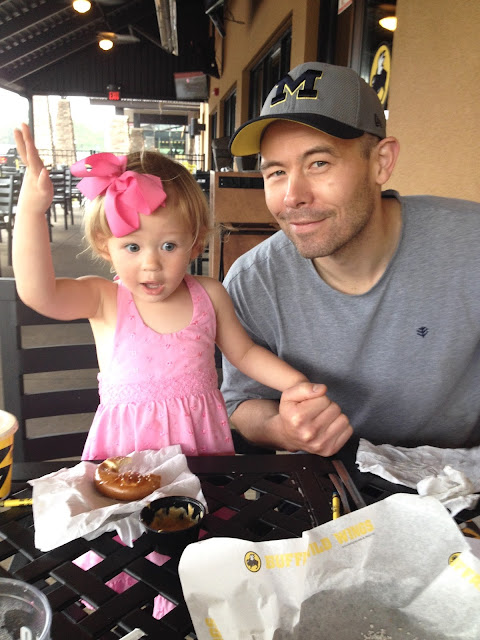 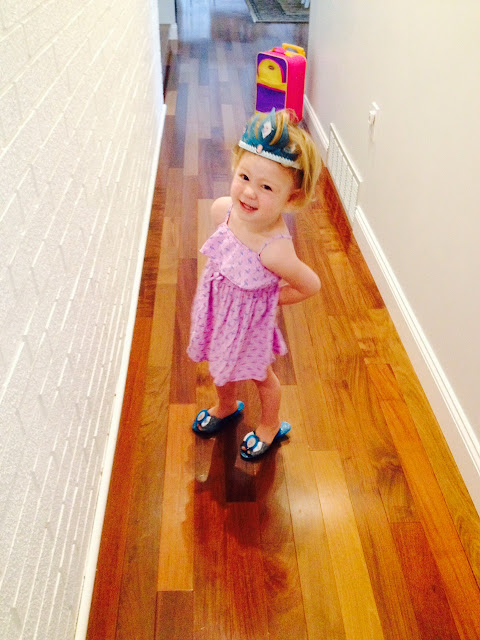 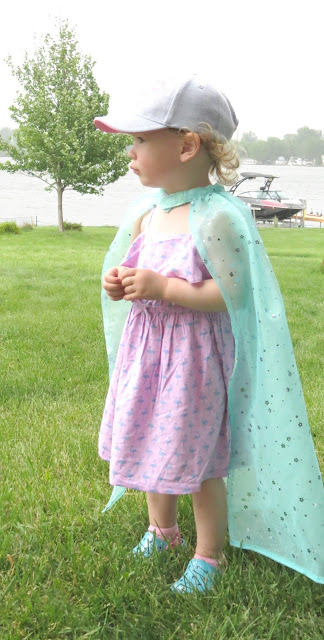 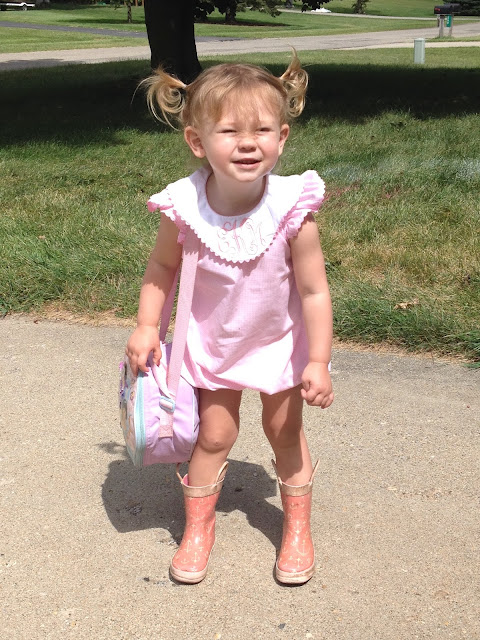 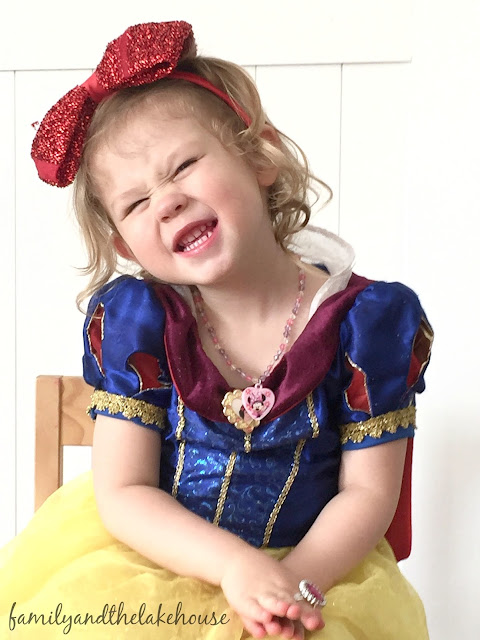 Lastly, how can I not mention our cat, Nubs?  I found him about ten years ago while at work.  My manager, who lived in the country at the time, had jokingly told me that his car had "meowed" while on his way to work that morning.  We went out to check on his "meowing" car and there was this itty, bitty little mischievous kitten who had climbed into the hood of my manager's car and just so happened to go on a ride of a lifetime!

I'm sure you're wondering why we call him, Nubs?  Welp, that's because he no longer had a tail upon finding him.  Poor kitty.  My only assumption was that it was cut off while riding under the hood of that car, especially since it was a fresh, clean cut.

Side note - growing up, I was NEVER a cat person - I was a dog/puppy kind of gal, but there was something about this kitty and I just couldn't let him loose in the high-traffic area where I had worked.  He was so, sooo little and cute...and, not to mention, scared.  As a result, I took a lunch break, drove him to the store (while he sat on my shoulder), bought him cat food and put him in our screened-in porch at home.  I then called numerous shelters and pet shops, but nobody would take him.  Over the course of a few weeks Jon and I started to play and snuggle with Nubs and we eventually fell in love...and the rest in history.........aaaaaaaand he's an indoor cat.........which means he really can't run away..........................so there's that, too...................he's kinda stuck with us.

This cat of ours is skittish, easily annoyed with us humans, playful when he wants to be, and he mostly does as he pleases - including that of gifting us with the occasional hair ball or two.  We love him though.  Nubs is part of our story.

He's a good kitty, a crazy kitty, but a good kitty nonetheless.  We like to occasionally tell him that he won the cat lottery.  He did, he really did.  From that initial car ride, to his unfortunate tail incident, to me bringing him home - he's pretty darn lucky, if you ask me.  You know, it's true what they say, a cat has nine lives.  At this rate Nubs has something like seven lives left...mostly because he's lazy and kind of spoiled...  ;)  Haha!

Let's rewind back to his glory days.  Here's Nubs in his prime, if you will?!  This is still one of favorite pictures of him... 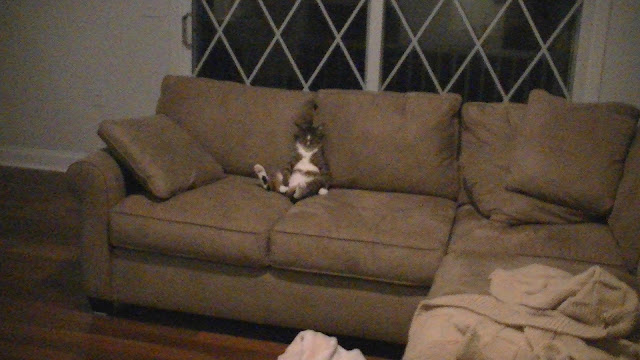 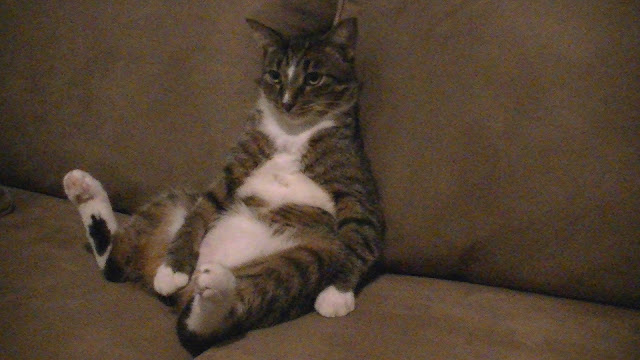 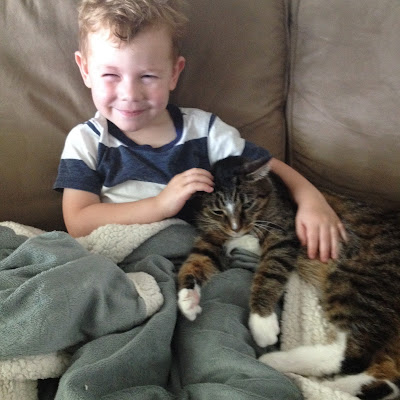 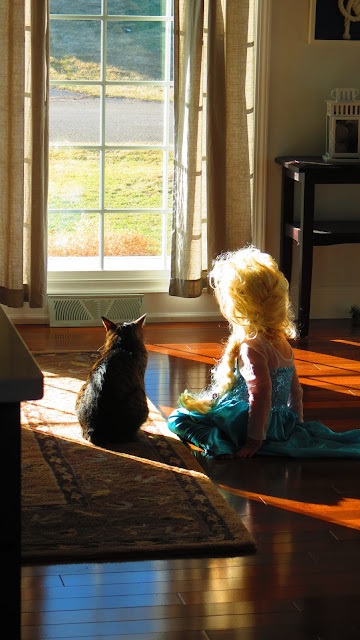 Also, I do believe I just wrote more about my cat than that of Jon and my children...  Lol!

Thanks for stopping by and reading about my loves.  Oh, what a wonderful world...

Email ThisBlogThis!Share to TwitterShare to FacebookShare to Pinterest
Labels: 2017, My loves, Valentine's Day